As I packed for my big night in Abby’s room, Room 16 in the Hotel Vendome, I couldn’t stop thinking about my conversation with Hal.

Was I doing this ghost hunting thing all wrong? I didn’t have any of the equipment he talked about—my ghost-hunting kit consisted of a notebook, a flashlight, and a camera.

Well, all that and food. Because you might get hungry waiting for a ghost to show up. 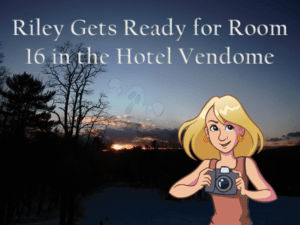 And caffeine. Because how else do you stay awake in the middle of the night?

But, maybe it was time to kick it up a notch. Become more professional. After all, other famous ghost hunters probably had all that technical equipment Hal mentioned, so maybe that’s what I needed to do: invest in some high-tech gadgets.

The problem was, I didn’t know where to start. Was there a store somewhere that stocked this kind of stuff? Would they show me how to use everything? There probably wasn’t time for Amazon to ship it all to me in time for tonight’s ghost hunt.

Maybe the Internet could help. But, a couple of searches later, my head was spinning.

Wait a minute. Radiation detectors? Are ghosts radioactive? Was I going to get radiation poisoning doing this? Oh man, I could practically hear Coco telling me “I told you so.”

Actually, a little more research revealed that no, ghosts aren’t radioactive, but radiation detectors could pick up EVPs. I had no idea what EVPs were, but they sounded important. I would have to remember that the next time I talked to Hal.

But, back to the more pressing concern—how could I get all this stuff before tonight? Not to mention, how would I afford it all?

That’s when I saw it in the search results: do-it-yourself ghost-hunting equipment! This had possibilities. I mean, how hard could it be? It had to be easier than putting together a swing set, right? There was even a YouTube video. Actually, a whole series of YouTube videos.

Although, tools would be a bit of a problem, since I didn’t own any.

I could definitely go buy one of those. That was totally within my skill set. And, while I was at it, I better buy a bigger bag to house my rapidly growing ghost-hunting kit.

After getting my new items, I was already feeling more professional. Plus, I had new acronyms to throw around, like “EMF” and “EVP.”

See, there was something to this upleveling.

The phone rang. It was Coco.

“Got your blog up yet?” she asked.

“Well, that’s certainly a better choice than a broom closet.”

I decided to ignore that. “And, I have actual ghost-hunting equipment.”

“Really? What were you using before?”

“Well, I had the basics,” I said evasively. “But now I have actual ghost-hunting equipment.”

“No, because I found a build-your-own ghost-hunting equipment site.”

“Wait,” Coco said. “You’re telling me you built it yourself? Don’t you remember what happened with the swing set?”

“We don’t need to talk about the swing set,” I said hastily. “Savannah is just fine.”

“The doctor assured us there was no lasting damage,” I said. “But, never mind that. Building my own ghost-hunting equipment was way easier.”

“Really?” Coco didn’t sound convinced. “So, what did you build?”

“An EMF meter,” I said proudly.

“What do you think? It tracks EMFs.”

“It means there’s a ghost nearby,” I said exasperated. Maybe I needed to do more research so I would have better answers.

“Sounds complicated,” Coco said. “How did you build it?”

“Wait, what? Why do you need a compass? To track which direction the ghost is going?”

“No, nothing like that. If the compass goes crazy and starts spinning around, that means there’s a ghost nearby.”

“I don’t understand. Did you have to modify the compass in some way?”

“Hmmm. Okay, so the compass spins around and then what?”

“Well, I have to investigate,” I said. “Take pictures and record it. Maybe try and talk to it.”

“Hmmm. You haven’t thought this through, have you?”

“Okay, Ms. Ghost Hunter,” Coco said. “If this all happens with a compass, then why do people buy EMF meters?”

“Marketing,” I said. “And, well, maybe the EMF meters have a few more bells and whistles.”

“Maybe the EMF meter also tells you what to do next.”

“Uh huh. So, you’re going to bring a compass tonight. Anything else?”

“I have a whole ghost-hunting kit,” I said evasively. I didn’t think Coco wanted to hear about my snacks. “Look, I gotta go. I want to be in position early.”

“Good luck,” she said as she hung up.

I finished packing, said goodbye to Geist, my ghost-hunting dog, told her to hold down the fort for me, and headed off to Hotel Vendome and Room 16.

Gia was there and checked me in. “Oooh, I’m so excited you’re here,” she said, handing me my key. This is it: Room 16. My first step in becoming a famous ghost hunter!

Thinking about Room 16 reminded me of Hal, and I furtively looked around for him. There was no sign of him in either the lobby or the bar. Good, maybe that meant I wouldn’t run into him.

Gia grinned and clapped her hands as I headed up to Room 16. 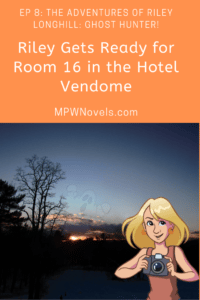 The hotel was quiet as I made my way up the stairs and down the hallway. My footsteps creaked on the old floor. The atmosphere definitely set the stage for a ghost hunt. Plus, the hotel looked like a throwback from the Wild West era.  I could easily imagine Abby and her cat Noble flitting along these hallways …

I wasn’t sure what I was expecting when I opened the door to Room 16. A banner saying “Abby Stayed Here?” Decorated in Halloween orange and black? Abby standing in the middle of the room, welcoming me with a ghostly cup of tea?

But, it was just a room, like any other room. Charming and quaint but still just a room.

I paused to take a few deep breaths, concentrating on whether or not I could feel anything—any sign of a presence. But, no. The room felt like any other hotel room.

Well, it was still early, I told myself, trying to squash down my disappointment. On the other hand, did I really expect it to be so easy?

I took a few minutes to unpack my ghost-hunting kit and lay out my EMF meter/aka compass. I placed it flat on a table, just like the video instructed, and studied it.

No, the needle wasn’t whirling around. No Abby. At least, not yet.

Oh wait. The video also said I needed to know which way was north. I rotated around the room squinting.

How to know which way was north?

Maybe Gia knows. I headed back down to the lobby.

“North?” Gia frowned. “I have no idea. Is that important?”

I wasn’t sure, myself, but the video said I needed to know. “Well it helps,” I said.

“Maybe stand outside? Look at the sun?” Gia offered doubtfully. “It’s setting that way.” She pointed. “So, north must be … uh, that way?” She pointed to her left. “No. that way. It’s to the right.”

Of course. The sun. I should have thought of that. A professional, famous ghost hunter would have. I really needed to step up my game.

I thanked her and headed back up to my room. As I crossed the hallway, a door popped open and Hal stuck his head out. My heart sank.

“Oh, it’s you,” he said. His bald head gleamed in the light, and he squinted at me from behind his thick glasses. “Just wanted to let you know I’m right here. So, if you have any problems tonight, you know where I am.” He gave me a big smile that I instantly distrusted.

Why oh why did Gia have to put him in the room right next to me?