How do you feel about paranormal activity or the Supernatural? Ghosts? Spirits? Demons? 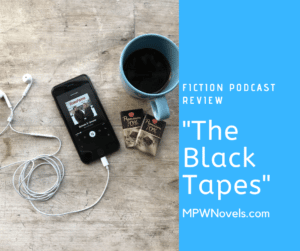 The Black Tapes is a serialized fictional docudrama podcast about one journalist’s search for truth, her enigmatic subject’s mysterious past, and the literal and figurative ghosts that haunt them both.

I discovered The Black Tapes a few months back when I became the Fiction Category Director of Podcast Magazine. Even though there haven’t been any new episodes for a couple of years, it’s still appears to be pretty popular and often comes up in conversation about audio dramas.

The Black Tapes messes with your head on a couple of levels. The first is the creators did a fabulous job of making it sound like an actual documentary. While you’re listening, it’s really easy to start to believe you’re following a real-life story.

The website continues the illusion by highlighting Alex (the journalist) and Nick (the producer) as actual people when, in fact, they’re fictional characters. There’s even a website for the Strand Institute, which is the organization Alex is investigating.

I found that I had to keep reminding myself this is NOT real.

Why? Because if you start to think it IS real, it is truly terrifying.

On the flip side, it took a little bit to get into. (At least it did for me.) The documentary style is so different than what I was used to that it took a couple of episodes to get into the flow.

But, once I did, I found it extremely addicting.

If you liked The Exorcist, and other possession/demon stories, The Black Tapes would be right up your alley.

However, if you find those stories uncomfortable, I think I’d pass on this.

One other issue is how it the series ends. Now, full disclosure, I only listened to the first two seasons. (Quite honestly, the way the second series ended freaked me out and I haven’t felt brave enough to start season 3.)

Season 3 is the last season and there’s only 6 episodes. If you look online, you’ll see many listeners weren’t thrilled with how it ended, so the creators have said they’re going to record more to finish the story arc better. I don’t know where that’s at right now.

But, regardless, even if you only listen to two seasons like I did, it’s worth it.

Check out The Black Tapes anywhere you listen to podcasts.