Note from Michele: This is an unpublished excerpt from Secrets of Redemption Book 4, The Summoning. It takes place in New York City before The Summoning begins.

Exclusive! Unpublished excerpt from The Summoning, Book 4 of the award-winning Secrets of Redemption series. Click To Tweet

Marguerite grimaced as she leaned back against the car’s seat and rubbed her belly. “Don’t be. I’m sure she’s fine.”

The two sisters were side by side in the back of a cab on their way to Marguerite’s prenatal appointment. As usual, the traffic was start and stop, and their cabby was particularly agitated, constantly yelling obscenities at the other drivers. 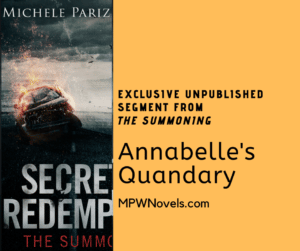 “You didn’t see her though,” Annabelle fretted. “She didn’t look good. And now I can’t get ahold of her.”

The cabby slammed on his brakes, swearing loudly, tossing both women forward.

“Hey, watch it,” Marguerite snapped. “Pregnant woman back here.” To Annabelle, she said, “If you want to worry about someone, worry about me. I’m the one who’s pregnant. Charlotte is just being Charlotte. Probably sulking somewhere.”

Annabelle bit her lip and turned to look out the window. What Marguerite said made sense. Charlotte did have a tendency to overreact.

Yet Annabelle couldn’t get the scene in the hospital out of her mind. The beeping of the machines, the smell of disinfectant strong in her nostrils, the sight of her baby sister with needles and tubes sticking out of her. She was so pale, nearly as white as the bedsheet, except for the huge purple-and-green bruises.

“Charlotte,” she had whispered as she approached, not sure if she should wake her sister or not.

Charlotte’s lashes fluttered as she opened her eyes. She stared at Annabelle, her eyes wide with horror as she recoiled away.

“It’s me, Annabelle,” Annabelle said, a little louder. She tried to smile, but it felt forced and unnatural.

What was going on?

Charlotte blinked, and her eyes cleared. “Oh, Annabelle,” she said. “I just … I don’t know what happened.”

“Shhhhh,” Annabelle said, quickly closing the distance to the bed and grabbing Charlotte’s hand. “Don’t worry about it.”

“I’ve just had such … terrible dreams,” Charlotte said, raising a bandaged hand to her forehead.

“I’m not surprised,” Annabelle offered, pulling a chair up to the edge of the bed. “You’ve had quite the ordeal.”

“You fell down the stairs.”

“The stairs in your apartment.”

Charlotte frowned as she processed the information. “No, no, I don’t think that’s right.”

At Alan’s name, Charlotte’s eyes went wide and her grip tightened painfully on Annabelle’s hand. “Don’t let him near me.”

“But, Charlotte, he’s your fiancé,” Annabelle began, but Charlotte shook her head emphatically.

“Annabelle, please,” Charlotte begged. “You must believe me. Please.”

Annabelle stared into her sister’s eyes. She wanted to tell Charlotte to be reasonable… that Alan wasn’t that kind of man. That he loved her, and Charlotte was just confused because of the accident and the drugs she was on. She just wasn’t remembering things right.

But she couldn’t say any of those things.

The terror in Charlotte’s eyes was so real, it was like a living thing. She kept squeezing her hand so tightly that Annabelle wondered if she might snap a bone or two.

Annabelle licked her dry lips. “Okay,” she said. “I believe you.”

Charlotte closed her eyes briefly, relief flowing over her face. “Thank you,” she whispered.

Now, recalling Charlotte’s unfounded-yet-all-encompassing fear, Annabelle felt a hint of unease. Was it possible her sister was telling the truth?

“You didn’t see her in the hospital,” Annabelle said again. “She was truly terrified of Alan.”

Marguerite rolled her eyes. “Charlotte has always been a drama queen. You know this, and I know this. What’s more believable, that Charlotte is making things up for attention, or that Alan is capable of hurting her?”

Marguerite had a point. It was difficult to picture tall, elegant, sophisticated Alan as the monster Charlotte claimed. And Charlotte was prone to exaggeration.

Marguerite adjusted herself again. “Of course I am. And isn’t it just like her to do something like this when I’m pregnant.”

Annabelle murmured an agreement, but in her mind’s eye, she couldn’t shake the image of the haunted look in Charlotte’s eyes.

She prayed she wasn’t making a mistake.

Want more? Check out The Summoning here, or get started with the series with It Began With a Lie.