Note from Michele: This is an unpublished excerpt from Secrets of Redemption Book 5, The Reckoning.

Exclusive! Unpublished excerpt from The Reckoning, Book 5 of the award-winning Secrets of Redemption series. Click To Tweet

A scrap of paper found in Rosie’s apartment, the day after she went missing. It was torn out of a notebook, the nubs of paper still attached. No date and no salutation. 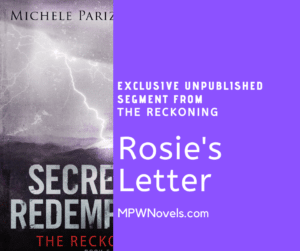 I had the dream again.

I can never remember much. It’s all so hazy, but I know I’m at work at The Lone Man Standing. There’s something in the woods behind the bar. Something I need to check out. Something that isn’t right.

But that’s it. I don’t remember anything else. I certainly don’t know what’s back there, if anything.

I get how weird it is to say it’s the same dream when I can’t remember the details, but I know it is. It feels the same.

Uneasiness. The sense that something is very wrong.

But also, the feeling of being summoned. That someone (or something) is calling me.

You and I both know there’s something not right at The Lone Man Standing. It’s clear Red is involved in … something. Best not to talk—or even think—about it.

That attitude has served me well there over the years I’ve waitressed. Well over a decade now. I’ve minded my own business and kept my nose out of Red’s. Everyone was happy.

Something has changed, and I don’t know what.

Want more? Check out The Reckoning here, or get started with the series with It Began With a Lie.