Today’s Author Spotlight is on JR Pomerantz, who wrote Rats in the thriller anthology, Make Them Pay! 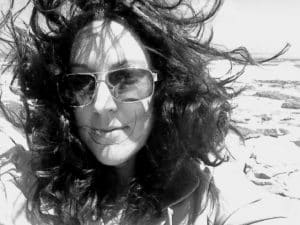 JR was raised in New Jersey, moved sixteen times, from Albuquerque to Kabul, and now resides in Silver Spring, Maryland. Hobbies include using all the forms of transportation in the world, flamenco guitar, and knitting. She hopes to one day own and operate a coffee farm.

She says: “This writing career is about one thing, and one thing only: writing epic adventure stories for the 21st century, earning 20 million dollars in revenue, using it to get shot into space, and writing a story about that. I guess that’s four things.”

Take it away JR.

A: Okay, here’s the opener: Ravi’s got four minutes to smuggle out his research rats before his lab explodes. The stress builds from there, and if I did my job right, the story will really blow your mind.  I hope you like it!

A: Zucker rats and Porsches, really, and if you’re not inspired by research rats or fast cars, then I just don’t know how to move you.

It’s part of a collection, New Espionage, I call it. Well, I’m calling it a collection right now, but if I’m going to be honest it’s really bigger than that; it’s really a genre I want to create.

My debut novel last June was Corporate Torsos Need Not Apply, a near-future cli-fi action-adventure comedy and then, in December, I released Love in the Time of the Improvised Explosive Device, a biomedical espionage thriller.

Now, Rats is a companion story to Love in the Time of the Improvised Explosive Device. All of these can be read in any order; it’s not a series. They’re in the same universe though, and there are some characters who overlap, like Ravi.

A: The first time I made money off my fiction, I was six. I won a tall tale contest. That lulled me into a false sense of the ease of publishing (and also caused me to dramatically overestimate the demand and enthusiasm for my work), which took longer. Much longer.

A: When I was a kid, I was big on spy novels. I read them all. And when I was done, I’d programmed a little bit of misogyny into my brain, which is inevitable after umpteen stories in which female characters never do anything particularly useful, typically just get captured.

It was the same with my favorite ‘80s adventure movies: they all seemed to have this xenophobia, or some other kind of prejudice written in for no reason. I was sick of the villain always being a guy with a scar. I wanted thrilling stories that didn’t rely on implicit bias. People with scars on their faces can be heroes too.  So, I decided to write my own.

A: Favorite is tough: I think I’ve read one of each. Plus, I’m easily thrilled by books and I get too scared, so I have to pace myself.

Right now, I’m reading non-fiction survival stories for an upcoming You Tube show I’m planning. I recently read 438 Days by Jonathan Franklin. Guy was adrift in a boat for 438 days. Some wild stuff in there. All true, too. Yikes. Perfect writing though. He did an amazing job telling the story.

Once Make Them Pay! comes out, I’m going to read it cover to cover and discover some new favorites that way.

A: You know, I haven’t seen them lately! Guess so.

A: One of my favorite hobbies is to use all the different forms of transportation in the world. Three months ago, I tried hang gliding for the first time, and that was fun. Thrilling. I also tried driving a Porsche on a race track. I pretended I had to for the story. I didn’t, really. I just wanted to try driving fast. But then I put the Porsche in the story, so in a way, it wasn’t strictly a non-writing activity. It was research. Totally unnecessary research.

If you want to check out Pomerantz’s story along with the other 21 top thriller authors, here’s where you can grab your copy of Make Them Pay!

Discover the inspiration behind the story author JR Pomerantz included in the Make Them Pay! thriller anthology. Click To Tweet 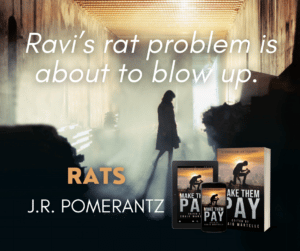