Today’s Author Spotlight is on Jack Probyn, who wrote The Silent One in the thriller anthology, Make Them Pay! 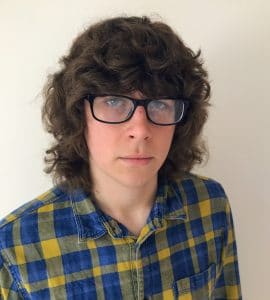 Jack is the author of the DC Jake Tanner crime thriller series. He hasn’t spent much time on the planet, but he knows what he wants: to entertain and enthrall readers across the globe with his stories. Growing up as an only child and never owning a pet – something he reminds his parents of constantly – Jack spent a lot of time reading and writing. After barely completing an English degree, he decided to turn his passion from a hobby into a career. When he’s not writing, he’s usually enjoying a sudoku or a true crime drama on Netflix. He lives in Surrey with his partner – who also one day dreams of owning a pet. Preferably a dog.

Take it away Jack!

A: My story in Make Them Pay is about a British hitman. He’s a former soldier and his dad’s a member of the secret service. The main character is a ghost in the machine, and he receives frequent targets from a wealthy businessman. The country — and the rest of the world — are busy enjoying the celebrations of Y2K, when he receives the name of his next target: his dad. The main character is forced to make a decision — between his next paycheck or killing the man who raised him. There are also a few other twists along the way.

A: I often find inspiration difficult to ascribe, as it’s something that usually comes when I’m not paying attention to it — or, at least, it comes, but I don’t pay attention to why it happened. I decided to write The Silent One because I’d never written anything like it before. It was my first foray into the world of underworld killers and assassins, and I must admit I liked it.

When writing police procedurals and crime thrillers, there are certain limitations in what police officers can and can’t do, for example, but when it came to writing about a hitman, I realised there was a lot more room for creative license. We’ll have to see whether there’ll be any more ventures into the underworld — only time will tell.

A: I first started writing during university a few years ago. Throughout the course we were tasked with writing small pieces of fiction — usually about 2,000 words (just long enough for the lecturer to enjoy it, and just short enough to make it a worthy task). I enjoyed writing the pieces, but they didn’t set the world alight — nor did they set my grades on fire!

During the course I was offered the opportunity to take a year out and gain some experience in the big wide world, where I imagine it was hoped that I would find a nice corporate job and contribute to the daily grind that way. On the commutes to and from work, I started writing. My first thriller was subsequently written, edited and published by the time I graduated from university. I’ve been writing and publishing ever since.

A: They’re the books I grew up reading. The first inspiration I ever had was Harry Potter, but then I moved onto the Alex Rider series (about a teenage spy), and fell in love with the explosions and the high stakes and everything else about it. Then that love developed into reading more adult thrillers — my mum was an avid reader of James Patterson, and I always read her hand-me-downs.

In my work, I like to combine the thriller aspect with crime. The Jake Tanner series combines a lot of organised crime aspects (robberies, guns, high-speed pursuits), along with the procedural element. And another aspect — police corruption. All of which boils in the pot to create something exciting.

A: Aside from the aforementioned James Patterson, I enjoy thrillers from authors on the other side of the Atlantic — most notably Chris Ryan and Andy McNab. One of my favourites was Red Notice, and I’m looking forward to seeing the adaptation coming soon. When I’m not reading crime/thrillers, one of my other favourite authors is the indomitable Stephen King. I read his stories from a young age, and like to think I’ve learned some things from the king of horror himself!

A: Funny you should say that. The short answer is yes. I’m currently working on the fourth instalment in the Jake Tanner series, and one of my beta readers is my mum. There’s a particular scene in there, where two young boys have been to visit a drug user’s flat, and one of the boys is forced to kill the user. After reading it, my mum left a comment along the lines of “this is disturbing Jack, I don’t know where you get your ideas from.” Similarly, another book in the series is about a serial killer; it’s dark, it’s nasty, it’s gritty. To my surprise, my mum didn’t mind it, but my girlfriend on the other hand is now slightly afraid of me!

A: I quite enjoy the marketing aspect of writing, when I get the time to do it. But when I’m not doing either of those things, I live in a county called Surrey, and there’s plenty of glorious scenes and landscapes that myself and my girlfriend enjoy walking — lots of hills, too, to get the old cardiovascular system pumping. I wish I was a good enough photographer to do the landscape justice, but sadly the photos I take on my phone aren’t quite up to the standard.

If you want to check out Probyn’s story along with the other 21 top thriller authors, here’s where you can grab your copy of Make Them Pay!

Discover the inspiration behind the story author Jack Probyn included in the Make Them Pay! thriller anthology. Click To Tweet 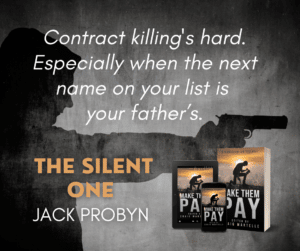