The suicide of William Goldacre is devastating to those left behind who will have to deal with its unintended consequences—could there be a link between the young man’s leap from a Dorset cliff and a horrific poisoning in Cambridge? 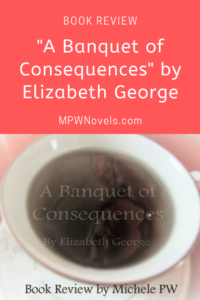 After various issues with her department, Barbara Havers is desperate to redeem herself. So when a past encounter gives her a connection to the unsolved Cambridge murder, Barbara begs Thomas Lynley to let her pursue the crime, knowing one mistake could mean the end of her career.

Full of shocks, intensity, and suspense from the first page to the last, A Banquet of Consequences reveals both Lynley and Havers under mounting pressure to solve a case both complicated and deeply disturbing.

I’ve been a big fan of Elizabeth George and her Thomas Lynley books (check out my review on The Punishment She Deserves here). A Banquet of Consequences is book 19 in her series.

However, I will say a few books ago (maybe around book 13 or 14), they started to dip in quality. I just didn’t feel like they were as strong as the earlier books in the series.

Now, they hadn’t fallen off a cliff so much that I stopped reading them, but I remember starting to feel sad that it appeared her best books were behind her.

This book turned it all around.

I truly felt like A Banquet of Consequences was vintage Elizabeth George, full of the dark family secrets and twisted relationships I’ve come to expect from her books. (Plus, Barbara Havers, Thomas Lynley’s partner, no longer seemed to be in the middle of a nervous breakdown, which was where he seemed to be heading in previous books.)

I did NOT expect the end at all. It truly took me by surprise.

If you like British detective series, I encourage you to give this one a try. You don’t have to start at the beginning to understand what’s going on.

I would give A Banquet of Consequences 4 stars. You can grab your copy from Amazon here: