Louise is a single mom, a secretary, stuck in a modern-day rut. On a rare night out, she meets a man in a bar and sparks fly. Though he leaves after they kiss, she’s thrilled she finally connected with someone. 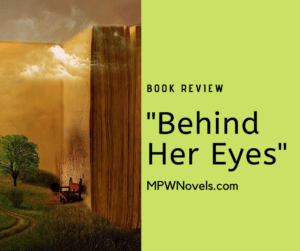 When Louise arrives at work on Monday, she meets her new boss, David. The man from the bar. The very married man from the bar…who says the kiss was a terrible mistake, but who still can’t keep his eyes off Louise.

And then Louise bumps into Adele, who’s new to town and in need of a friend. But she also just happens to be married to David. And if you think you know where this story is going, think again, because Behind Her Eyes is like no other book you’ve read before.

David and Adele look like the picture-perfect husband and wife. But then why is David so controlling? And why is Adele so scared of him?

As Louise is drawn into David and Adele’s orbit, she uncovers more puzzling questions than answers. The only thing that is crystal clear is that something in this marriage is very, very wrong. But Louise can’t guess how wrong—and how far a person might go to protect their marriage’s secrets.

Imagine picking up what you think is a pretty straightforward mystery—a police procedural mystery.

You’re about halfway through the book when it is suddenly revealed that the main detective can talk to animals.

But not just any animals. Specifically, potbelly pigs.

And, as luck would have it, the main suspect and the victim BOTH have (wait for it) potbelly pigs as pets. As does the detective.

But it’s a darn good thing the detective has this special (and very specific) skill, because otherwise, he never would have solved the case.

Now, how did all of these people who have potbelly pigs as pets find each other? (Were they members of a potbelly pig Facebook group, maybe?) 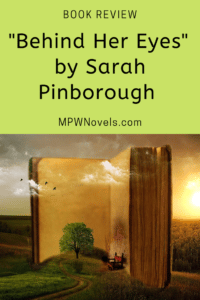 Alas, no. It was just one of those funny coincidences that sometimes happen in real life, but that feel completely contrived in a novel.

And that pretty much sums up how I felt reading Behind Her Eyes by Sarah Pinborough.

Without giving anything away, what you don’t realize until you’re about halfway through the Behind Her Eyes is that there is a pretty major supernatural element to the book.

So major I would classify it as more of a horror psychological thriller than “suspenseful.” (But, to be clear, not gory or violent horror.)

Anyway, I don’t blame Sarah Pinborough for this. I blame the publisher for not making it clearer in the description and subtitle.

But, as jarring as that issue was, it wasn’t even the biggest one, for me.

That bigger issue is that the plot relies way too much on huge coincidences and massive stupidity.

To start, (and I’m not giving anything away here, as it’s revealed almost immediately) three of the main characters suffer from night terrors.

Do you realize how rare night terrors are in adults?

About the same as the percentage of adults who have potbelly pigs as pets.

(Okay, I’m making that last part up. I don’t actually know how many people have potbelly pigs as pets.)

But, maybe there is a logical explanation. Perhaps they all met in a night terror support group.

Three random people just happened to come together, and all suffer from night terrors.

And they HAVE to suffer from night terrors, or the plot doesn’t work. At all.

I probably could have lived through the mislabeled genre and night terror coincidence, but the real kicker is this:

One of the main characters has to be completely and utterly stupid for the “twist” at the end to work.

Part of my utter frustration with this book is that it COULD have been great. Truly. It was twisted and diabolical and you can’t put it down. The characters are unique and believable. It could have been great.

I even have some ideas on how the author could have solved some of the “coincidental” issues.

But, no. Instead it just came across as sloppy.

And that was the biggest disappointment of all.

I’m giving Behind Her Eyes by Sarah Pinborough two stars. You can grab your copy below at Amazon.

And I’d love to hear from you. Did you read Behind Her Eyes? What did you think? Comment below.