Did I really just see an actual, genuine real ghost?! 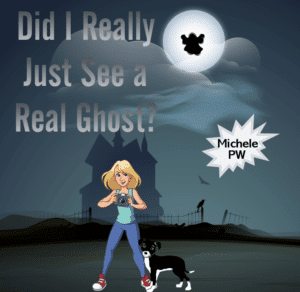 Did I just catch a glimpse of Faith, the resident real ghost of the Hassayampa Inn in Prescott, Arizona?

With shaking hands, I pawed through my ghost-hunting kit to find my notes. Yes, there it was.

Faith wore a pink a dress.

Oh my God. I just saw a real ghost.

I had to get out of here.

I shoved everything back into my ghost-hunting kit as fast as I could before tripping over the mop and falling in a heap outside of the broom closet.

Oh God. Did Faith talk too? I let out a little scream before I realized it was the cute guy from downstairs. He was staring at me with something like horror on his face.

“Did you see her?” I asked frantically.

Now he looked confused and horrified. “See who? Did you just fall out of the broom closet?”

“Faith, the ghost! The real ghost!”

His eyes widened. “You saw Faith?”

“Pink dress, flowers and everything. Did you see her?”

He shook his head. “No, I just got here. I had a complaint about loud noises up here.”

“It must have been Faith.”

“But it must have been her. I saw her walk past me in the hallway and disappear there.” I pointed to room 426, the room Faith hung herself in.

He looked even more skeptical. “Walk past you where? From the broom closet?”

I waved my hands around. “That doesn’t matter. What matters is I saw Faith. She walked by me.”

All around us I could see doors opening. People dressed in the nightgowns and oversized nightshirts peered out at me. Suddenly, I was conscious of myself—still splayed out on the floor covered in coffee stains and empty packages of Reeses Peanut Butter Cups.

If that wasn’t enough, the mop decided to choose that exact moment to tip over, whacking me on the head.

The cute hotel employee jumped forward. “Oh my God, are you okay?”

“I’m fine,” I said, brushing off his attempts to help while awkwardly getting to my feet. I bent down to pick up the mop, but he beat me to it.

“Don’t worry about this. I can …” he paused as he peeked into the closet, seeing my coffee-soaked rag, empty bottle of iced salted caramel mocha coffee, and more empty Reeses Peanut Butter Cup packages. “I can take care of this. Although, I still don’t understand why you were in the broom closet. Were you looking for something?”

Oh crap. I was hoping he would have forgotten about the broom closet. “Uh … I was … Faith! I saw Faith.”

“We already established you saw Faith.”

“No,” I said. “I mean. I saw Faith and she scared me so much I jumped into the broom closet.”

Now he really looked skeptical. “You jumped into the broom closet to escape from Faith?”

“Of course,” I said. “I figured it was safe. No one had ever seen Faith in a broom closet before. At least, no one had ever talked about it.”

“And what about all the candy wrappers?”

“Those were already in the closet.”

He stared meaningfully at the stain on my shirt. I found myself plucking it self-consciously. “Well,” I said brightly. “If that’s it, I better get going.”

“I want to know who this Faith is,” the older woman asked.

“Faith is … pretty harmless,” he said. “I think you’ll be okay. But, what room are you in? I can check if there’s been any sightings in that room.”

I was shaking my head. “No. Absolutely not. I have to go.”  I turned and started marching down the hall as the older woman came out of her room and stood in front of the employee. “I demand to know who this Faith person is and why she’s wandering around the hotel.” 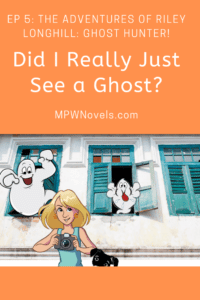 “Wait a minute,” he called out. “Folks, it’s okay, go back to bed. I have this under control,” he said as more people came out of their rooms. “Really, folks it’s fine,” I heard him say as I ran down the stairs.

I called my best friend Coco as soon as I was outside. “Coco! You’ll never guess what happened.”

“Riley, do you have any idea what time it is?”

“Nevermind that. You won’t believe what just happened.”

“Were you in an accident? Are you okay? I told you this ghost hunting thing was a bad idea.”

“You saw Faith? How did that happen? I thought you were staying in your camper and not renting a room.”

I reached my car, quickly unlocked it, and jumped inside. The street was quiet. No sign of police or anyone following me. I was safe.

“You what? You’re mumbling. All I heard was something about a broom closet.”

“You mean to tell me,” Coco said carefully, “that you spent part of the night in a hotel’s broom closet? And you thought this was a good idea?”

“This was your idea, you know,” I said defensively.

“My idea? I never told you to do anything so stupid.”

“You told me to go investigate. Spend the night. So I thought I’d camp out in the hallway and see if anything happened. And it did! I saw Faith.”

“Are you sure it was Faith and you just didn’t fall asleep and dream her?”

“No, because I had just finished talking to Craig.”

“Craig? I thought you two broke up.”

“We did. He called, oh never mind. We’re getting off track here. The point is I spent the night and I saw Faith. Now I can write about her.”

“Did it occur to you that you probably could have called the marketing manager at the Hassayampa Inn and that person likely would have let you see the room? Without having to break the law?”

“I wasn’t breaking the law,” I said indignantly, although it hadn’t actually occurred to me to call the marketing manager. I was suddenly all too conscious of my sticky tee-shirt, and I began feeling rather foolish.

“But, I wasn’t doing anything.” Other than soaking up a rag. And leaving Reeses Peanut Butter Cup wrappers for that cute hotel employee to pick up.

“Uh huh. So, when you write about this story in that ghost-hunting blog you haven’t started yet, do you think maybe the Hassayampa Inn will put two and two together?”

Uh. I hadn’t thought about that.

Riley Longhill is a fictional alter ego of Michele Pariza Wacek. The Adventures of Riley Longhill, Ghost Hunter, is a fictional account loosely based on real life ghost and haunted places. Yes, the Hassayamapa Inn in Prescott, Arizona is a real place and Faith is real and does haunt the hotel to this day. (And no, I didn’t personally try spending the night in the hallway — this is all a figment of the author’s imagination.)