My phone rang as I was sitting in the maid’s closet at the Hassayampa Inn. I jumped, spilling my iced salted caramel mocha latte all over me. 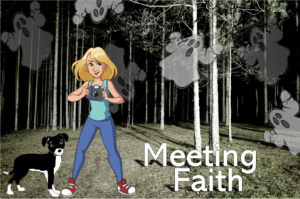 It was Craig, my on-again, off-again EX-boyfriend.

I grabbed at the phone, spilling more coffee all over myself, trying to silence it before the entire hallway of guests came out of their rooms to see what the commotion was all about.

“What do you want?” I hissed into phone, as I unsuccessfully tried to mop up the coffee. Napkins, I told myself. I definitely needed to add napkins to the ghost- hunting kit. Oh, but wait. I was in a broom closet, after all. Maybe I could find something.

“I don’t have to be friendly. We aren’t dating anymore. Remember?”

“Why are you whispering?” he asked. “What’s going on? Are you with someone?”

I managed to find an old rag that looked somewhat clean and used it to scrub at my clothes. “What part of ‘not dating’ did you not understand?”

“So, you ARE with someone? We just broke up.”

God, I couldn’t believe I was arguing about this in a broom closet. “Can we talk about this later? This isn’t a good time.”

“I can’t believe you started dating someone. Doesn’t our relationship mean anything to you?”

I squeezed my eyes shut and started counting to ten. “We’re. Not. Dating. Anymore. There is no relationship. That means if I want to, I can date someone else.”

“I didn’t break up with you. You broke up with me.” I sucked in my breath. “This is ridiculous. I’m not even with anyone right now, anyhow.”

“Then, why are you whispering?” He still sounded suspicious.

“Because I’m in a broom closet.” It sounded even worse out loud then it was in my head.

“You’re what? Did you say a broom closet?”

I was starting to wish there was a hole in the broom closet I could crawl into. “Yes.”

He was silent for a moment, digesting the new info. “You’re dating a married man, aren’t you?”

“What?” I couldn’t even believe what I had just heard. “How did you get ‘dating a married man’ out of ‘I’m in a broom closet?'”

“Because his wife must have come home and now you’re hiding.”

“Oh my God, Craig. I just told you I’m not seeing anyone.”

“Then what are you doing in a broom closet?” 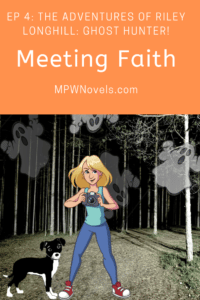 “In a broom closet?”

“Why not? What’s wrong with a broom closet?”

“The ghost is a she,” I informed him, feeling like I really needed to get the conversation back under control. “Her name is Faith.”

“And did Faith die in a broom closet?”

“Well, no,” I admitted. “Not exactly. She hung herself in the honeymoon suite.”

“Has Faith been seen in the broom closet?”

“Well, no,” I said. “At least, not to my knowledge. But that doesn’t mean she couldn’t haunt here, from time to time.”

“But, if she died in the honeymoon suite, why aren’t you investigating there?”

“Because I’m trying to save money. At least until I get the blog going.”

“Let me get this straight,” Craig said. “You want to become a ghost hunter. And you’re going to monetize being a ghost hunter by writing about your adventures on a blog. Which means you need to investigate ghost sightings. And you’re investigating by hiding in a broom closet even though the ghost has nothing to do with the closet.”

“It’s not as bad as that sounds,” I protested. God, this couldn’t be that terrible of an idea, could it? “I’m in a broom closet next to the honeymoon suite.”

“But, you’re still outside the suite.”

“Faith has been seen in the halls too,” I said.

“No, we certainly wouldn’t want that to happen,” Craig said.

“I’m not bailing you out if you get thrown in jail for this,” he said.

I hung up. Stupid Craig. Faith’s ghost probably flitted by while I was on the phone with him and I missed it. All his fault.

Not only that, but I think I stained my clothes. What the hell is wrong with Craig anyway? Calling in the middle of the night, making me dump coffee all over myself.  We’re not dating anymore. Why is that so tough for him to grasp?

It was too dark in the broom closet to get a sense of the real damage, so I gently pushed open the door. Yes, there was definitely a pretty dark stain on my navy tee shirt. Maybe if I soaked it as soon as I got home …

As I examined the damage, I realized I was smelling something that made no sense in my surroundings; was it fresh flowers? Why would I be smelling flowers in the middle of the night, in a hallway?

Oh no. Was someone in the hallway? Was I about to be caught?

I glanced up, only to see a wisp of pink catch my eye. Oh God, I really was about to be caught. How on earth was I supposed to explain hiding in the broom closet in the middle of the night?

I tried to focus in on the pink. The pink was actually an old fashioned pink gown.

There was a woman in the hallway. I held my breath, hoping she wouldn’t notice me. That gown … was there some sort of party or reenactment going on? It seemed pretty hot outside to be wearing such a thing. And was the flower scent coming from her?

She disappeared into a room, and I let the air out of my lungs with a “whoosh.” Thank God, she hadn’t seen me.

I leaned back, breathing deeply as I concentrated on slowing my heart rate and breathing down. First Craig, then the woman. I was a bit on edge.

Maybe I needed a Reese Peanut Butter Cup. That would make me feel better. More than that, I deserved some chocolate after everything I had been through already.

As I rummaged around my ghost-hunting kit looking for the package, my mind kept straying back to the woman. Why was there a woman wandering the halls in the middle of the night? What is with that dress, and why would she be carrying fresh flowers?

Did I actually see her walk into a room?

Did she stand there, unlock the door, and open it?

Or had she just simply … disappeared into it?

Riley Longhill is a fictional alter ego of Michele Pariza Wacek. The Adventures of Riley Longhill, Ghost Hunter, is a fictional account loosely based on real life ghost and haunted places. Yes, the Hassayamapa Inn in Prescott, Arizona is a real place and Faith is real and does haunt the hotel to this day. (And no, I didn’t personally try spending the night in the hallway — this is all a figment of the author’s imagination.)