Looking back on it now, I can see exactly what happened. It was the perfect storm: I continuously ignored the whispers from my soul to get my books out into the world, and my anxiety and worry spun out of control.

I’m a six on the Enneagram scale. If you’re not familiar with the Enneagram, it’s a personal development/spiritual development tool based on our fatal flaws (called “passions”), which are based on the seven deadly sins plus an additional two. The Enneagram claims that our personalities are created by our own natural inclination to keep our worst fear from coming true. Alas, ironically, the harder we try to prevent our worst fear, the more likely we’ll bring it to life.

The Universe is most definitely a bit of a trickster.

(If you’re interested in this, I recommend you check out the book The Wisdom of the Enneagram. It includes a quiz to help you pinpoint your type.)

So as I mentioned, I’m a six. That means I’m a worrier. (Yes, all types worry and have anxiety, but fear is what drives the six.)

Years of worry and anxiety eventually caught up to me. That was the day I finally broke down. It was one of the best things to happen to me. Click To Tweet

I had allowed my fear and worry to control and dominate me for so many years, I was starting to lose my focus and concentration. Things escalated that year until reaching a climax in October, when my mother called to tell me she had been diagnosed with cancer.

I held it together long enough to fly home and help out for a couple of weeks during her initial surgery, but shortly after I returned home, in early November, I reached my breaking point.

I started crying one night, and I couldn’t stop. For weeks I suffered from nightmares. I felt broken, like something had cracked inside me.

Then one day, one of those goofy personal development sayings plastered all over social networking platforms (usually as a meme) finally sunk in:

I was having a pretty crappy reaction to what life was throwing at me. 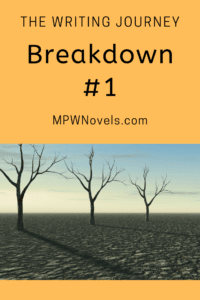 BUT it was also in my power to change it.

I reached out to one of my good friends, who was also a spiritual mentor, and we started to work together.

(The first thing she had me do? Buy that Enneagram book!)

And that was the beginning, for me. It’s how I learned to face my emotions so they would stop controlling me. Instead of constantly reacting to my fear-based emotions (fear, grief, anger, shame, guilt, etc.), I figured out how to actually respond to them.

Eventually, this led to my Love-Based Copy teachings (which you can read more about here), and to birthing an entire series of books on Love-Based Business.

It also eventually opened the door to publishing my fiction.

But, first, one more event had to happen before I finally, truly, committed myself to getting my books out into the world.