Two Truths and a Lie. The girls played it all the time in their cabin at Camp Nightingale. Vivian, Natalie, Allison, and first-time camper Emma Davis, the youngest of the group. But the games ended the night Emma sleepily watched the others sneak out of the cabin into the darkness. The last she–or anyone–saw of them was Vivian closing the cabin door behind her, hushing Emma with a finger pressed to her lips. 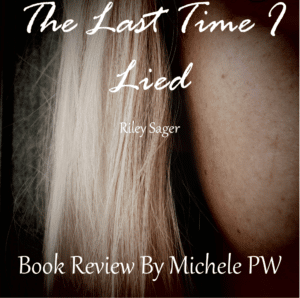 Now a rising star in the New York art scene, Emma turns her past into paintings–massive canvases filled with dark leaves and gnarled branches that cover ghostly shapes in white dresses. When the paintings catch the attention of Francesca Harris-White, the wealthy owner of Camp Nightingale, she implores Emma to return to the newly reopened camp as a painting instructor. Seeing an opportunity to find out what really happened to her friends all those years ago, Emma agrees.

Familiar faces, unchanged cabins, and the same dark lake haunt Nightingale, even though the camp is opening its doors for the first time since the disappearances. Emma is even assigned to the same cabin she slept in as a teenager, but soon discovers a security camera–the only one on the property–pointed directly at its door. Then cryptic clues that Vivian left behind about the camp’s twisted origins begin surfacing. As she digs deeper, Emma finds herself sorting through lies from the past while facing mysterious threats in the present. And the closer she gets to the truth about Camp Nightingale and what really happened to those girls, the more she realizes that closure could come at a deadly price.

Well, if you’ve been reading my other book reviews, already know I have a soft spot for books around lying. So, of course I was going to pick up “The Last Time I Lied” by Riley Sager.

This is the first book I’ve read from Riley Sager, and I found it to be a solid psychological thriller. An unreliable narrator, you as the reader never completely sure what’s real and what isn’t, AND a head-snapping twist in the end I didn’t see coming BUT made perfect sense when you though about the book as a whole.

The Last Time I Lied -- a solid psychological thriller with a twist I didn't see coming. Check out the full book review for more. Click To Tweet

Nothing wrong but nothing that really made it stand out either and become a book I will remember. 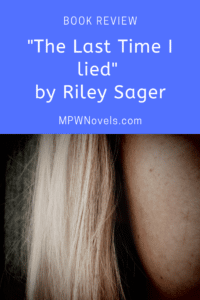 Anyway, if you’re looking for a very solid psychological thriller with a great twist, this is definitely worth a read.

I would give The Last Time I Lied by Riley Sager 4 stars. You can grab your copy from Amazon right here.