For years, my office was in my bedroom.

While there are many things I love about my house, one thing I don’t love is that it’s only two bedrooms. Sure, they are HUGE bedrooms (our house has a very open floor plan with tons of windows and beautiful views) …

But there are only two.

(Hubby got the second one.)

So, back in 1998, when I quit my job and decided to go back into freelancing, I set up a desk in the bedroom.

Over the years, my desk migrated to my bed. (You see, I’m quite tall and my height is in my legs, so I find sitting at a chair uncomfortable for long periods of time).

In my bed, I could stretch my legs out. I could prop my laptop up and comfortably write.

On my bed, I wrote six nonfiction books, two (nearly three) fiction books (the other two novels were written at my desk before I migrated to the bed), and I built a multiple six-figure copywriting company.

So, why would I change anything?

Well, because in addition to all of the success I’ve had, I also realized I’ve created a lot of bad productivity habits on that bed.

This year, I’m determined to increase my daily writing output (I want to release three fiction books this year; plus, I have another nonfiction book percolating).

I’ve never done that before.

And, I’m a big believer that if I want to do something I’ve never done before, I need to take different actions.

(“The definition of insanity is doing the same thing over and over again and expecting different results.” Albert Einstein, of course. I also am reminded of George, on Seinfeld, who decides to “do the opposite” on one episode. At the beginning of the episode, he had no job, no girlfriend, and was living with his parents. At the end of the episode, after “doing the opposite,” he’s still living with his parents, but has a hot girlfriend and a great job with the New York Yankees.)

So, one of the actions I decided to take was to move my office out of my bedroom.

Well, I decided to try the dining room. Here’s a pic. 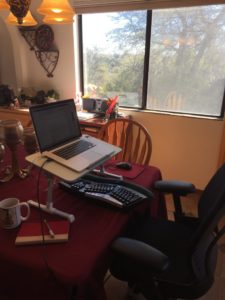 So, part of why I chose the dining room was because of a memory from when I was a teenager. (When I tell you this story, keep in mind I’m old.)

Computers were barely a thing when I was sixteen, but my dad had purchased an Apple 2E, which had a word processor. It was a family computer, set up in our rarely used dining room, which was next to our rarely used living room and our heavily used kitchen. (We mostly ate in the kitchen and watched TV and whatnot in the family room.)

I had some of my most productive writing years sitting in the dining room, listening to my mother cooking behind me and playing Queen albums on the little stereo in the living room.

I wrote my very first novel there (which I’ve since lost, and is such a bummer–I’d love to look at it again), along with a bunch of short stories, one of which won a national award.

When I remembered that story, I thought maybe I should give the dining room a try.

I’ve been there for a week now, and have already noticed things shifting. I’ll keep you posted on how this experiment goes.