You may not know this, but I have an alter ego named Riley Longhill, and she’s a ghost hunter.

I’ve been visiting real haunted places all across the country as part of my research for Riley, and it’s been eye opening to say the least.

I’ve been amazed at how many people have told me about their ghostly encounters, as well as by the sheer amount of haunted places that exist in the U.S.!

So, it’s not out of the range of possibility that you ARE living in a haunted house! Right now!

But, how do you know?

Well, good news, I’ve got you covered. I’ve created a short quiz to help you determine if your house is just old, creaky, and groany … or if you have a ghostly tenant.

Ready? Let’s do this.

How can you be sure if you're living in a haunted house or not? Well, this quiz is perfect for you. Click To Tweet

Circle all the statements that are true:

Someone died in your house (that you know of).

A tragedy happened in your house (that you know of).

You’ve seen things in the corner of your eye that, when you take a second look, don’t seem to be there.

You’ve had the distinct sensation you aren’t alone in your house, even though you know no one is there.

You’ve heard suspicious noises that don’t seem to have any rational explanation.

Your friends tell you they’ve seen or heard things that don’t seem likely.

You have friends who say they’ve felt uneasy in your house.

You have friends who refuse to visit you anymore because they’re not comfortable in your home.

You’ve taken pictures that have strange orbs or unexplained lights in them.

You’ve thought you heard voices, but no one is there.

You’re always losing things, even when you know you put something in a certain place; when you go to look for it, it’s not there.

Items seem to move around your house even though you don’t remember moving them.

You’ve awoken in the middle of the night in a cold sweat, sure there is a ghost in your room. (Becca, my main character in the Secrets of Redemption books, feels your pain here.) 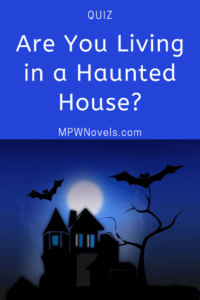 Scoring: Count the number of statements you circled, and see below.

7-12 statements circled: I’m not saying you have a ghost problem, but it may not be a bad idea to invest in some ghost-hunting equipment. (Just to see what happens.)

13 statements circled: Call a psychic. And maybe an exorcist. Burn the sage.

Or learn to be happy living in a haunted house.

And, of course, make sure you check out how Becca dealt with living in a haunted house in my award-winning Secrets of Redemption Series.

(But, ghosts aren’t real, right? Is the house actually haunted? Or is something else happening?)

Book 4 in the Secrets of Redemption series! It started so innocently. Charlie only stopped in this charming, wholesome town because she was lost. But things are never as they seem in Redemption …