I never planned to write this book. 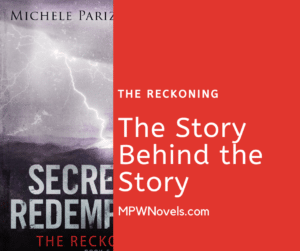 That isn’t to say the story wouldn’t have been told—it definitely would have. But it would have been wrapped up in one book in my Secrets of Redemption series rather than two.

However, the moment the story downloaded into me back in April 2020, I knew Charlie’s story was way too complex to be contained into one. In order to do it justice, I needed time and space.

So, The Summoning was destined to be a cliffhanger. There was no other option.

Which meant I HAD to finish The Reckoning as quickly as possible. I didn’t want a big gap between the two books, because I know how excruciating it can be as a devoted reader to have to wait too long for a story.

So, the moment I typed “The End” in The Summoning, I immediately started The Reckoning.

Now, I do realize this isn’t all that unusual for a lot of authors. They finish one book, and the next day, they’re starting on the next.

That’s not the case for me. I usually take a break between books. I need a little time to unwind myself from one story and begin living in the next.

The Reckoning was different. I didn’t have that luxury, as I was racing against the clock. And even as a continuation of The Summoning, it is also a very different book.

Without revealing any spoilers, I never thought I would take my characters on this journey.

And I was nervous. (Well, all authors are, really. In one of my authors’ groups, we’ve talked about how it doesn’t matter how many books you’ve written and published, you’re still terrified to release the next one. In many ways, you’re only as good as your last novel. Which is not to say you have permission to stop writing. And that means the fear never goes away.)

I was plagued with questions. Would readers like it? Would they find it satisfying?

They buzzed around my head constantly as I wrote, and really, the only thing that kept me going was that ticking deadline.

In a lot of ways, that deadline was a blessing. It kept me writing, regardless of the fear. Without it, I may have allowed the fear to keep me second guessing. I may even have allowed it to stop me.

And The Reckoning would never have made it into the world.

In many ways, I feel like these two books are the best books I’ve ever written. But, as always, it doesn’t really matter what I think.

All that matters is what you, the reader, think.

Every story has its own story. The behind-the-scenes story of how it got written. This is the story of The Reckoning. Click To Tweet

Here’s where you can check out The Reckoning, but if you haven’t started the series, I highly recommend beginning with It Began With a Lie (or you can grab all 3 books in the Secrets of Redemption Box Set).