Note from Michele: This is Part 3 of a complete short story that takes place in the Secrets of Redemption universe. However, if you haven’t read the free novella, The Secret Diary of Helen Blackstone, you may want to start there as this short story builds on what was revealed there. You can also check out Part 1 here. 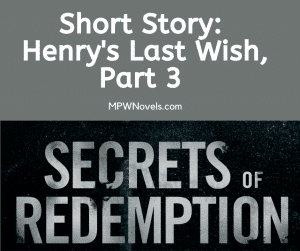 She awoke in a cold sweat, standing in the hallway in front of the room at the top of the stairs, her hand on the doorknob.

She couldn’t remember her dream—or, more likely, her nightmare. All she could recall was fragments, but the feeling of something being wrong … that something was stirring … and the need to stop it from happening was very real.

But what? And why was she in front of this door?

She had no idea. All she knew was she didn’t at all like the direction she was headed.

Something bumped her legs, which almost gave her a heart attack, until she realized it was Midnight. He looked up at her, his green eyes steady and calming. “Okay, we’ll get you some breakfast,” she said, although she instinctively felt that breakfast wasn’t what he was asking for.

She headed down to the kitchen, trying to breathe through the stress and anxiety swirling around inside her. Nothing had felt right since she decided to put the house on the market.

Actually, if she was going to be really honest, nothing had felt right since the moment Henry parked by her curb and extracted that deathbed promise from her.

She wasn’t sure what was going on with her. Was it just grief over Henry’s death? The despair of knowing she was the last of her family?

Or was it something else? Something tied to the house?

For years, she had sensed there were two, well, entities in the house. Not ghosts exactly, and neither having anything to do with what her mother had done all those years ago.

No, these “entities,” for lack of a better word, seemed to be bigger than all of that. She wasn’t sure how to describe them, but it always felt to her like one was on the side of good and one on the side of evil. And somehow, she felt they were directly tied to the town itself and what happened back in 1888.

For the most part, they were quiet. Dormant.

But now, they had been awoken.

And that wasn’t good.

If she knew that, everything would be easier. But whether it was that nothing was actually clear or that her own emotions were clouding the issue, nothing made sense. She no longer had any idea what she was supposed to do.

Worse, she had no clue how to figure it out.

She was about to make some lunch when there was a banging on the front door.

Startled, she dried her hands on a dish towel and went to see who it was. People so rarely came to her house that she wasn’t sure what to expect.

Peering through the peephole, she saw a man she had never met before. He appeared relatively large with an abundance of red hair.

There was something about him that made her uncomfortable, but her good manners compelled her to open the door. “Can I help you?”

She blinked. Now that she was closer to him, she realized he was a lot bigger than she had thought. His black Deep Purple tee shirt stretched across an obvious beer belly. “I’m sorry?” she asked.

The uncomfortable feeling increased. “Why do you think it’s for sale?”

“Isn’t it?” he asked, his dark eyes boring into hers.

Two simultaneous and completely different thoughts crashed into her head. One was full of excitement. This was her chance—she could really sell! Fulfill her dying brother’s last request and finally escape Redemption for good.

The second was stronger, more intense, and a lot simpler.

And in that moment, she knew. There was no way she would sell right now. This wasn’t the time, and the red-headed giant in front of her for sure wasn’t the right owner.

“You’ve been misinformed,” she said coolly, starting to close the door. “It’s not for sale.”

One beefy hand slammed against the wood, keeping it from shutting. “Oh, I don’t think so,” he said, his eyes glinting.

She tried to push the door closed again, but he was too strong. “Remove your hand,” she said, more confidently than she felt.

“Not until we have a little chat,” he countered.

“I’m not selling my house. And if you don’t leave now, I’m calling the cops.”

He shoved the door hard, and she fell backward, landing in the middle of her living room. “Like I said, not until we have a little chat.” He stepped across the landing, a nasty smile stretching across his face.

She stared up at him, fear coating her mouth with the taste of copper pennies. What had she done?

He folded his arms across his chest. “Now, this doesn’t have to be unpleasant,” he said. “I’m fully prepared to be generous and pay you above market value. I’m not wanting to take advantage of you … but I AM buying this house.”

What was she going to do? She was no match for him physically, even if she wasn’t on the floor. She didn’t have a weapon or anything she could try and use as one. The closest phone was on a table on the other side of the living room, but it might as well be a mile away as there was no way he would let her reach it.

She was completely, utterly helpless.

How could she have been so stupid? She had ignored the warnings and allowed this into her home. And now, she was trapped.

He raised an eyebrow. “Well? Shall we talk price?”

She swallowed. “I’m not selling,” she said, wishing her voice didn’t sound so shaky.

His face darkened. “Yes. You are.”

She shook her head. “No. The house is not for sale.”

He took a menacing step toward her. “I have no desire to hurt you,” he said. “We can do this the easy way or the hard way. It’s up to you. But I WILL own this house.”

She licked her lips, her mouth dry, terror flooding her body. The house was in such an isolated area, no one would hear her scream.

For a moment, she faltered. A price hovered on her lips. She had no idea if it was too much or not enough, but if it meant he would leave without hurting her, it would be worth it.

Except … she was a Blackstone. Was she really going to allow herself to be bullied into selling?

Was she going to allow this thug to negate all the sacrifices she had made over the years?

Was she going to let the evil win?

She straightened her shoulders, even though she was till sprawled awkwardly on the floor. “Do what you must,” she said, her voice ice cold. “You will never get this house.”

He stared at her, his eyes hard and cold, and took a step toward her. “We’ll see about that.”

She folded her arms across her chest. “You really think this house will let you hurt me?”

He paused. His eyes flickered, and she saw uncertainty in them. “I’m the real owner,” he said.

“You sure about that?” she pressed. “Because if you’re wrong, the house isn’t going to take kindly to you.”

He didn’t move, and for a moment, she thought she had won—that he was about to turn around and quietly leave. But then his expression turned ugly. “I guess I’ll have to take that chance,” he said, coming toward her with his huge arms swinging.

If this was her punishment for contemplating selling before the house wanted her to, then so be it.

But she did close her eyes. She didn’t want to watch.

There was a bang, a thud, and then, a weird high-pitched noise that sounded like a shriek. Her eyes flew open.

The man was barreling full force through the doorway, his back to her. As she watched, he ran down the steps and into his waiting truck.

Slowly, she pulled herself to her feet, checking herself and the room to see if anything had been damaged, or for some clue as to what had happened.

Nothing jumped out at her. Everything seemed just as it always did.

She turned, and that’s when she saw Midnight sitting on the landing, his tail flicking.

She studied the cat. “Do you know what happened?”

“Did you have something to do with it?”

His green eyes blinked a couple of times as he nonchalantly began cleaning himself.

“Well, whatever you did, thank you,” she said.

Midnight glanced at her, and she could almost see the self-satisfied smirk in his dark green eyes.

She shook her head, exasperated, and went back into the kitchen.

There was nothing more annoying than a self-righteous cat.

For more Secrets of Redemption, check out the first book It Began With a Lie.