Make Them Pay is a  thriller anthology that includes 22 never-seen-before stories, including one from me called “Mine,” which takes place in Redemption.

Keep reading for a sneak peek: 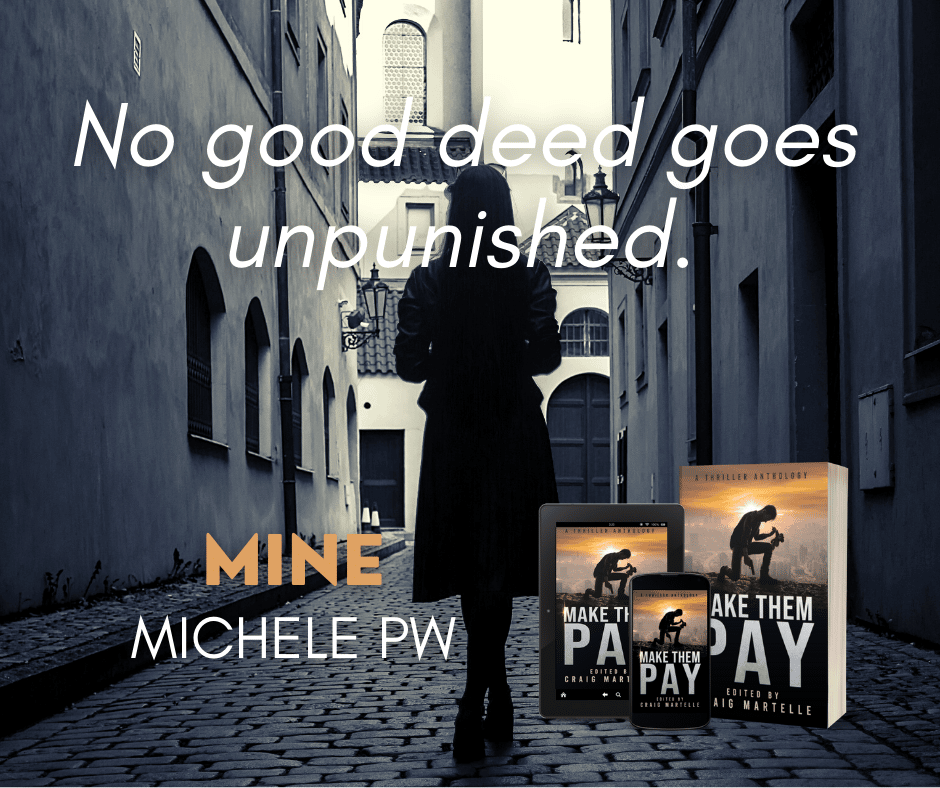 The girl was nervous.

Her head kept whipping around as she strode down the darkened street, trying to take in everything at once. The death grip she had on her purse reminded me of a how a drowning person might clutch a life preserver, as if she were praying it would somehow save her from whatever lurked in the shadows of the alley.

But she didn’t need that purse.

I would protect her.

Clearly, though, I needed to have a firm conversation with her about how dangerous it is for a woman to walk by herself at night even with the light of a full, bright moon in a clear night sky. Even in a town as safe as Redemption.

We would have that talk as soon as I was able to safely introduce myself.

She tripped on a crack in the sidewalk, her arms flailing for a moment while she righted herself. I paused, letting her catch her breath, trying to ignore how much she reminded me of Jenny. Jenny was such a klutz, too. If I hadn’t spent so much time saving her over and over again, who knows …

No, I had to stop. I promised myself I wouldn’t think of Jenny anymore.

Tonight was about the girl.

She started walking again, her heels clicking briskly on the sidewalk. She appeared to be paying more attention to where she was walking now, increasing my approval. If I wasn’t around, she would need to be more concerned about her environment, but with me right behind her, it was acceptable for her to focus on watching her step.

She was approaching another cave-like alley, dark with shadows. The hairs began to rise on the back of my neck as a shiver went down my spine.

I peered into the shadows, squinting to get a closer look. Was there something there? A predator hiding in the dark, motionless and silent, patiently waiting for its prey?

The girl continued on her way, blissfully ignorant of the danger lurking just up ahead.

I had to do something.

But what? I couldn’t blow my cover. It was too soon. I couldn’t make that same mistake again.

But I couldn’t allow her to walk blindly into danger, either.

I quickened my steps, careful to keep them light. Her heels were so loud on the pavement, they sounded like miniature firecrackers.

Maybe she wouldn’t notice. Maybe it would be fine.

I held my breath as I moved closer, trying to stay as quiet as possible. It seemed to be working; she gave no indication she had any idea I was behind her.

At that exact moment, my foot came down on a branch lying on the sidewalk. I cursed myself—if I hadn’t been so focused on her general lack of awareness, I would have noticed it.

Instead, it snapped under my foot, as loud as thunder. She spun around, her eyes wide, her expression suspicious.