I knew something was off the moment I stepped back into my room, Room 16, Abby’s room. 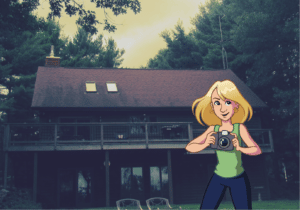 I did a careful scan. What was I missing?

The bedspread was still smooth and untouched. My ghost hunting kit was on the floor. My overnight bag was next to the closet …

Wait a minute. My ghost hunting kit was on the chair when I left. Not on the floor.

Or … was it? Now I wasn’t sure. I thought back to all the things I did when I first walked into the hotel room.

Yes, I was sure I put my ghost hunting kit on the chair because I wanted to get my compass out. And …

Where was my compass?

Oh God. I could feel the hairs on the back of my neck stand on end.

My compass was gone.

I was SURE I left it on the table. I had been trying to figure out the whole north business, and I set it down when I left the room. Although, now that I thought about it, couldn’t I have just looked at the compass? Why did I feel the need to go find Gia?

But, that was beside the point. Right now, I needed to find that compass.

I quickly searched and discovered it laying on the floor, upside down, like it had been knocked off the table.

Had I done that?

A cold touch of fear caressed my spine. I shivered.

I looked around the room, seeking any sign of a ghostly presence. But everything seemed perfectly normal.

Other than my compass being on the floor.

I picked it up and tried to orient it to north. But, no matter which way I pointed it, it stayed west.

Something was wrong. What happened to it? Did it somehow get broken when it fell off the table?

I laid it down and stared at it. Now what? I had been so excited to finally have a piece of ghost-hunting equipment in my ghost-hunting kit. Now that it was broken, I felt so disappointed.

Should I try to fix it? How would I do that?

A little voice inside me answered: Craig would know.

No! I’m NOT calling Craig. He’s my EX-boyfriend, which means I don’t call him to help me fix problems.

Well, if not him, then who? I didn’t get the feeling Gia knew her way around a toolkit. I suppose I could knock on Hal’s door. He seemed like a pretty handy guy. Probably be happy to help, so he could try and weasel his way into this room and do his own investigation.

Of course, then I’d have to admit I was a ghost hunter with no ghost-hunting equipment. No thanks.

Or I could just continue  investigating the way I started—with no equipment. And my trusty snacks, of course. And caffeine.

But, that felt like failure. I was upleveling! I needed actual ghost-hunting equipment.

It appeared I had no choice. I had to call Craig.

“Riley, this is a surprise.”

I squirmed a little. “I need your help.”

“If you don’t want to help, then just tell me,” I snapped. God, this was a bad idea. I never should have called.

“It might be tough for you to come over as I’m still in Prescott, Arizona,” I said.

“Are you still in a broom closet?”

“No! I’m in the Hotel Vendome. I’m investigating Abby and her cat Noble. I’m actually in her room.”

“I’m investigating ghosts,” I said impatiently. “Abby and Noble are both ghosts.”

I sighed. “My compass broke.”

“Compass? What on earth do you need a compass for? You’re not tracking a ghost, are you?”

Creak. Groan. Some sort of shuffling noise against the hotel door. What was that?

“Not tracking as in following a ghost,” I answered, trying to focus on my conversation with Craig. “It’s part of my ghost-hunting equipment.”

The shuffling grew louder. I shifted so I could get a better view of the door, but I couldn’t see anything. The hotel was pretty old. It was probably just the normal settling noises that occur in an old building.

“How does a compass fit into ghost hunting?”

“EMFs? Are you talking about electromagnetic fields?”

There was a lot of creaking and shuffling going on near the door. What was it? Was I hearing something in the hallway? Was Gia there? Or Hal? Trying to listen in to me? How dare he!

“In other words, you don’t know what you’re talking about.”

“Research? What kind of research?” 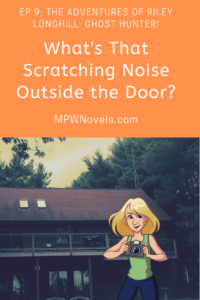 The noise was driving me crazy. I had to put a stop to it. I started edging toward the door. Maybe I could catch Hal in the act of listening in on me. That would embarrass him, but good!

“Research on ghost-hunting equipment,” I said to Craig. “One of the main pieces of equipment is an EMF meter.”

“Why don’t you have an EMF meter?”

I was trying to quietly creep up to the door, but I stepped on a board that made a particularly loud squeak. I winced. “Do you have any idea how expensive ghost-hunting equipment is?”

“I don’t understand. What does any of this have to do with a compass?”

Finally, I reached the door. I took a deep breath, grasped the door handle and flung it open. “Ah ha!” I yelled. “What are you …?”

The hallway was empty.

“Riley?” Craig’s voice came out from the phone. “What’s going on? Are you okay?”

One of the other doors opened then, and Hal’s shiny bald head popped out. I quickly backed into the room and shut the door. God, how embarrassing.

“I’m okay,” I said. “I thought I heard something in the hallway.”

“You thought there was something in the hallway? Did you look through the peephole?”

“Ah …” That would have made more sense. “Everything is fine.”

“Riley, what were all those sounds I heard?” Craig asked. “Did you just open the door because you heard noises in the hallway? What if someone was there? What would you have done?”

“I can protect myself,” I said. “Besides, everything is fine. I still need your help with the compass.”

Craig sighed. “Okay, so what is going on with it? And I still don’t understand why you have one.”

I left the door and went back to the table where I had left my ghost-hunting equipment and the compass. “I watched a do-it-yourself video, and the video said I could use a compass to detect ghostly activities. But, there’s something wrong with it.”

The noises started again from outside the hallway, but now they sounded more like scratches. I decided to ignore them.

I picked it up and shook it. “It’s stuck. It’s not moving, no matter which way I turn it.”

“Did you check it in the store?”

“I don’t think I dropped it. I left it on the table, and when I came back, it was on the floor.”

The scratching grew louder. It was getting harder to ignore.

“Riley,” Craig said slowly. “What’s supposed to happen to the compass if there’s a ghost?”

“Well, it’s supposed to go crazy or something. Not act like a compass.”

The scratching was really loud now. And what was that high-pitched jingling noise? Was that a … bell? Why would there be a bell?

“Riley, your compass isn’tacting like a compass,” Craig said. “Maybe it’s not broken. Maybe it’s doingthat because there’s a ghost in your room.”