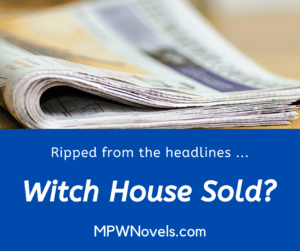 It appears the Witch House has a new owner.

Real estate records obtained by The Redemption Times shows that Helen Blackstone has transferred ownership of the ‘Witch House’ to Charlie Kingsley, a newcomer to the area.

It was a surprising move as Blackstone, who had grown up in the house, had never shown any indication she wanted to sell.

“We never saw a for sale sign, never saw anyone express any interest in seeing the house,” said Janice Anderson, one of Blackstone’s neighbors who lived a few blocks down. “Helen was born in that house, we always assumed she would die there.”

Blackstone, a noted recluse, refused to comment, merely saying it was time for a change.

The house got its nickname because it’s supposedly haunted by Blackstone’s mother, Martha, who, in 1913, had murdered her maid Nellie before killing herself.

“None of us understood why Helen would stay in such a house,” Anderson said. “And we really don’t understand why someone would buy it.”

Kingsley also refused to comment as to why she would choose to purchase a haunted house, simply saying that she felt drawn to the house and was happy Blackstone agreed to sell.

According to official documents, she is moving here from New York City.

“It’s all very odd,” Anderson said. “And not at all neighborly. I certainly hope once she’s settled in, she’ll be more welcoming.”

Other people have a different opinion of Kingsley. “She’s always been very warm and friendly,” said Howard Turley. “I see her almost every day for breakfast at Aunt May’s. You knew she was working there, right? Just because she’s a little reserved and doesn’t constantly chatter on about all the details of her life, doesn’t mean there’s anything wrong with her.”

Some people have speculated Kingsley is here because the town ‘summoned’ her here. “Redemption clearly wants her here and wants her in that house,” said Josephine Knightly, referring to a popular town lore that Redemption ‘chooses’ who stays and who goes. “That’s the only reason why Helen would ever leave that house.”

“Nonsense,” Turley scoffed. “They both probably just wanted a change. There’s nothing supernatural or odd about that.”

Why would anyone choose to buy the Witch House? Redemption Times covers this story and more in today's issue. Click To Tweet

The Summoning, Book 4 in the Secrets of Redemption series is coming October 2020. Finally discover the story of how Charlie ended up in Redemption. In the meantime, get started with first book in the series It Began With a Lie available now.