I admit it, my last ghost hunting adventure at the Hassayampa Inn had … mixed results. 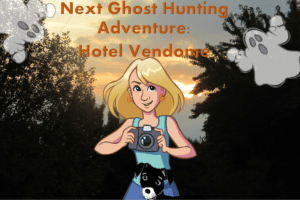 On one hand, I saw my first ghost! Yay me!

On the other hand … I wasn’t sure I could actually, you know, post about it without getting in trouble.

Well, never fear. Today was a brand new day. A brand new start to my ghost hunting adventure! And, what better place to get that fresh start but the Hotel Vendome in Prescott, Arizona.

According to local legend, Abby and her husband moved to Prescott because Abby was sick with TB. While it appears they were living in the hotel, it’s also a little unclear why that was.

The most popular story claims they were the original owners of the hotel, which was built in 1917, but ended up losing it and the new owners kept them on as managers. However, according to folks who have actually researched old deeds, there’s no proof they ever owned the hotel. Which, of course, doesn’t mean they weren’t the managers, just that they never owned it.

Other stories said they were simply living there for free. I suppose they could have been paying guests as well.

Regardless, they were living in the Hotel Vendome in 1921 on the day when Abby’s husband went out for medicine for her, and never came back. Abby was so distraught, she locked herself in her room, refusing to eat until she perished. She also locked her cat Noble in the closet, and he died at about the same time. Now, both Abby and her cat haunt the hotel.

“A ghost cat,” I said to my dog Geist (Geist means “ghost” in German and is pronounced Guy-st). “What do you think about that?”

Geist did not appear to like that idea at all.

“I know you used to chase that feral cat in our neighborhood,” I said. “But, maybe a ghost cat would be different.”

Geist picked up her alligator squeaky toy and gave it a few good hard squeaks. She shot me a meaningful look, the toy dangling out of her mouth.

“Are you saying that’s what you want to do to the cat?”

Geist squeaked it one more time.

“Well, unfortunately for you, the hotel doesn’t allow dogs.”

Geist groaned and put her head down.

“It’s not my decision,” I started to say when my phone rang. It was my sister, Katie.

“How’s the zombie hunting?” she asked. “Hey kids, be careful with that saw.” In the background I could hear the kids bickering. “It’s my turn with the saw. No, you always get it! It’s mine.”

“Zombies? What, you think I’m in a Walking Dead episode?”

“And you think zombie hunting is real?”

“Oh yes, ghosts. Have you found any yet?”

“Just one?” She sounded disappointed.

“Just one? Most people never see a ghost. Ever. In their entire lives.”

“Yes, but most people aren’t ghost hunters. I would think if a ghost hunter couldn’t see ghosts that would be a bit of an issue.”

“Whatever,” I said. “I’m getting ready for my next adventure. I’m going to look for Abby. In the Hotel Vendome.”

“What happened to Abby?” 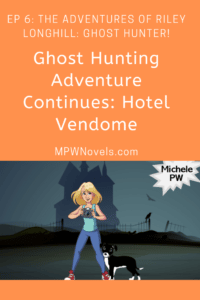 “Her husband went out for medicine or something and never came back, so she locked herself and her cat up in the room and starved to death.”

“I’m sensing a theme,” Katie said. “Didn’t your last ghost die because her husband went out for cigarettes and never returned?”

“Do you think they stick around to haunt their husbands?” I asked.

“Oooh, that’s an idea. I’m going to tell Jack if he goes out for cigarettes one night and never returns, that’s grounds for me to haunt him.”

‘Just as long as you don’t kill him first.”

The Hotel Vendome would be my most famous haunted hotel yet. Although, that wasn’t saying much as it was only my second. But, still. The Hotel Vendome had been featured in a bunch of specials and stories of documented hauntings.

With any luck, I, too, would meet Abby. With even more luck, I’d get a really cool story out of it that I could share on my soon-to-be famous blog.  Once I started it that was.

I took a moment to imagine myself being interviewed on Ellen, or maybe even Oprah, and having them sitting there spellbound as I recounted how I made contact with Abby and her cat Noble …

My phone rang. It was my best friend Coco.

“Got that ghost hunting blog started yet?” she asked.

I could practically hear her roll her eyes. “Have you done anything else?”

“I’m working on the banner,” I said, which was almost true. I had been thinking about how the banner should look, but I was still going back and forth on a color scheme. Could I use something like a navy or dark purple, or did I need to keep it black and white? Could I put a ghost in it or was that too cheesy? So many decisions.

“That’s quite a lot,” I said defensively. “What more should I be doing?”

“Oh, I don’t know. Call me old fashioned, but maybe you could, you know, write something.”

“You’re the one who told me I couldn’t write about the Hassayampa Inn and being in the broom closet,” I said. “So, I’m heading over to the Hotel Vendome tonight.”

“Who is the ghost at the Hotel Vendome?”

“Famous? Really. So what’s your plan? Are you going to hide in a broom closet again?”

“Well, that’s a step in the right direction,” Coco said. “Speaking of steps, what is the first step?”

“Why are you asking me?” Coco asked. “I’m not the big ghost hunter here. Is that what a “real” ghost hunter would do first?”

“I AM a real ghost hunter,” I said indignity.

“Oh right. I forgot. Must be because there’s no blog to remind me.”

“I told you, I’m working on the banner,” I said. “I can’t launch a blog without a banner. What would youdo?”

“Oh, I don’t know,” Coco said. “Maybe research? I mean, you said this is a famous site, so maybe doing (and posting) some more research before you actually show up would be good.”

That was actually a pretty good idea. Maybe I should do some research on Abby and Noble and the Hotel Vendome before actually doing the ghost investigation. Maybe that would provide some solid background that would make my blog even juicier.

So, now there was only one problem: where to find all that great background.

Riley Longhill is a fictional alter ego of Michele Pariza Wacek. The Adventures of Riley Longhill, Ghost Hunter, is a fictional story loosely based on real life ghost and haunted places. Yes, the Hotel Vendome in Prescott, Arizona is a real place and Abby and Nobel are real ghosts and do haunt the hotel to this day.