To start my research on all the ghost sightings of Abby, the ghost at Hotel Vendome (along with her cat, Noble, who is also part of the real ghost stories and true hauntings lore), I decided to check out the local Sharlot Hall Museum, which is dedicated to preserving Prescott’s rich Western history. 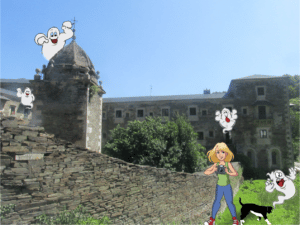 Prescott is actually an old mining town, over a hundred years old. (Which explains why it’s the site of so many ghost sightings and real ghost stories.) It was even the first capital of Arizona. Doc Holiday apparently spent some time here gambling (and killing a few folks!) before joining Wyatt Earp in Tombstone (He was likely in Prescott for the same reason as Abby as they both had TB).

Big Nose Kate (Doc’s girlfriend) also apparently worked here for a short time as a prostitute. I’m unclear if that was before or after Doc’s death, and how much Doc had to do with her decision to work a prostitute, but if it was before and if he did have something to do with it, might Big Nose Kate’s ghost be flitting around here, too? Maybe she’s even haunting Doc Holiday as payback for the whole prostitution thing. I mean, it seems just as bad as the whole “going out for cigarettes and never coming back” ordeal Abby went through. (If you missed that episode, check it out here.)

Anyway, I digress. I’m not looking for Big Nose Kate’s ghost right now, anyhow. This is about Abby and Noble.

I figured if there were any records of true hauntings and real ghost stories around Prescott, I’d find them at Sharlot Hall Museum. 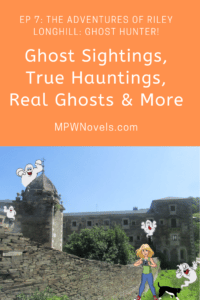 What I discovered there is that Abby was actually the source of a couple of books, The Search for Abby, and Hotel Vendome: The Story of Prescott’s Historic Haunted Hotel, both by Ken Edwards.

I was SO excited to learn that there had been so many ghost sightings of her over the years that there was enough fodder for not one but two books. Apparently, both Abby and Noble liked to roam all over the hotel.

Well, now that I had more background, it was time to go check out the Hotel Vendome.

From the outside, it looked more like a bed and breakfast than a hotel. It was a charming building located a block off of Prescott’s famous downtown and Whiskey Row.

Better yet, inside there’s even a little bar. How perfect! I couldn’t think of a better way to research than over a glass of wine.  I immediately headed over. It had to be five o’clock somewhere, right?

There was one woman standing behind the check-in desk.  When she saw me head over to the bar on the other side of the lobby, she followed me.

“What can I get you?” She wore black, had short black hair too black to be anything but dyed, and multiple piercings, most in her ears but one in her nose, too. The only thing that wasn’t black on her was a small white name tag that read, “Gia.”

I ordered a glass of wine and explained I was there to learn more about Abby.

“Oh, you’ll want this,” she said, after pouring my wine. She disappeared for a moment and came back with a huge book, which she plopped down in front of me. “This is our Abby book.”

I started to page through. It was loaded with real ghost stories and ghost sightings of both Abby and Noble, and it went back years. I was amazed.

“Have you seen Abby?” I asked Gia.

She shook her head. “I’m still pretty new. But, I’m hoping.” She folded her arms and leaned over the bar. “To be honest, a big reason why I took this job was because I want to see her.”

She widened her eyes. “Oh my God, that’s so cool. Are you on a show or anything?”

“I have a blog,” I said. It was technically true, right? I had bought the domain name, so that meant I had it. Just because I hadn’t actually started posting didn’t mean it didn’t exist. “But, I’m still just getting started,” I continued, seeing her start to open her mouth, presumably to ask me for the URL.

“Let me go check.” She left the bar and I went back to sipping my wine and perusing the Abby book.

“You are so in luck,” she called out excitedly. “It’s available tonight! Do you want to stay?”

Did I want to stay? I did, but what about Geist? And was it smart to spend the money when I had a perfectly good trailer to stay in? Oh, the hell with it. Geist will be fine. More importantly, I needed to prove myself to Coca and Craig and Katie that I was serious about becoming a ghost hunter.

“Yes!” She seemed almost as excited as I was. I handed her my credit card and she got me checked in.

“Think you might mention me on your blog?”  She asked handing me back my card.

“You never know,” I said, although I had never thought about writing about the people I met along the way. I’d have to consider.

Gia looked like she was going to say something else, but right then an older, balding man with dark-framed glasses walked into the lobby, dragging a wheeled suitcase behind him. She excused herself to help him and I went back to the Abby book.

There were so many stories. One woman had brought ghost-hunting equipment and had noticed big spikes in Room 16, indicating lots of a paranormal activity. Another one had gone to bed with the closet door closed and, in the morning, found it open. Still others had had their belongings moved around the room.

I was deep in a story about one of the employees who had an encounter with Abby in the basement when a voice next to me said, “You took my room.”

He gestured with his head toward my new ghost-hunting friend Gia. “She says you’re a ghost hunter, too?” His voice was friendly enough, but his eyes narrowed slightly behind his glasses.

“Well, ah, I’m just getting started,” I said as Gia popped up from behind the bar.

Well, I guess I didn’t have to worry about that decision anymore.

“Like I said, I’m still getting started,” I said, reaching for my wine. In my haste, I spilled a few drops on the Abby book. “Oh no!” The red wine looked like blood glistening on the ghostly pages.

Gia reached over with a bar rag to wipe it off. “Don’t worry about it. That’s why we have plastic sheets over all the pages.”

“Did you want to check out the Abby book?” I asked the man, feeling both relieved that the discussion was now off my blog and embarrassed about the spill.

“Sure. I’ll take a look,” he said as I slid the book over. “Gotta do some research myself for my own blog.”

“Yep. Amateur. I have the equipment right here.” He patted his suitcase. “I was really looking forward to using it today.”

I wasn’t sure how I should answer that. Sorry? Better luck next time? Maybe this would be an excellent time to leave, so I could get my stuff for tonight.

But the man kept talking. “What type of equipment do you have? I have a Rook EMF Reader, which I’ve been pretty happy with, especially for the price. But, I’ve been eying an EDI meter, which I’ve heard great things about.”

“You know,” I said, sliding off the bar stool. “I didn’t realize the time. I have to, ah, go meet someone. But, maybe I’ll see you later?”

“Sure,” he said, and smiled. It didn’t quite seem to reach his eyes. His glasses glinted.

I swallowed and did my best to smile back. Gia enthusiastically waved at me. “See you later, Riley. I’m working tonight, too.”