When I started It Began With a Lie, the timing was anything but convenient. 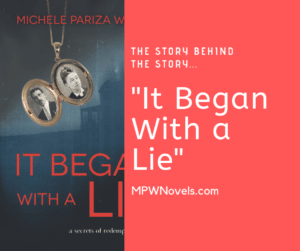 It was March of 2015. If you’ve been following my Writing Journey series, you’ll notice that was roughly midpoint between when I sat in ICU alone with my mother, convinced it was her last day on earth, and when she actually did pass on June 30, 2015.

When I look back at that (roughly) ten months of time, it feels like a grace period. My mother was alive, but quite sick, and I think deep down we all knew it was just a matter of time.

I hadn’t written any fiction in eight years. I hadn’t even looked at the two novels I had completed years earlier (The Stolen Twin and Mirror Image), much less published them. My book-writing focus (such as it was) was being poured into writing my nonfiction Love-Based Copy books.

Writing fiction was the last thing I felt I had the time or energy for. Yet I found I just couldn’t shake the mantra I had repeated over and over at my mother’s bedside:

I’m not going to die with my books inside me.

That March, Becca (the main character in It Began With a Lie) began to follow me around. Then she began talking to me.

At first, her voice was quiet, barely a whisper, but it soon grew louder and more incessant.

It had been years since my fictional characters had trailed me, asking (or demanding) me to write their stories. When I had decided it was too painful to keep writing fiction, I had shut off that part of me, refusing to listen to my characters’ pleas. Their voices because softer and softer until, eventually, they disappeared altogether.

It was easier that way, I told myself.

But, even then, I knew I was lying.

Finally, I sat down, opened a new word document, and started writing.

It was dreadful. I couldn’t reach Becca at all.

It took weeks and a half-dozen false starts before I even felt the beginnings of a connection with Becca. And even then, it was still an uphill battle as I slowly, painfully, shook the rust off, and taught myself to write fiction again.

It wasn’t an easy journey. I’ve lost count of how many times I stopped and started again.  I couldn’t tell you the number of rewrites (MAJOR rewrites) and hair-pulling moments I went through.

But, looking back, I see how necessary all of it—every step of the experience—really was. It was exactly what I needed to get myself back on my writer’s path.

I think that’s one of the reasons I named the town where the story takes place “Redemption” … because it  represents my own fiction-writing redemption, too.

Every story has its own story. The behind-the-scenes story of how it got written. This is the story of It Began With a Lie. Click To Tweet

You can check out It Began With a Lie right here. 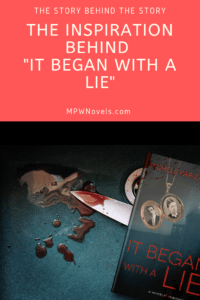