I never dreamed Charlie Kingsley would become such a major force in my life. 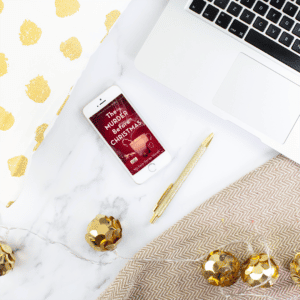 I was in my twenties when I first had the glimmering of the idea that would eventually become It Began With a Lie. At the time, I thought it was going to be a one-off, standalone book, focused mainly on Becca and her journey. The aunt who left Becca the house that catapults the journey was merely a shadowy figure—so ill-defined, I didn’t even have a name for her then.

Years later, while my mother was dying, the idea raised its head, insisting I tell the story. That’s when Aunt Charlie suddenly leaped into existence, a stronger character than I ever thought she would become. When It Began With a Lie turned into a trilogy, Charlie’s backstory started to come into focus, and I realized I could write a prequel starring her.

But I still didn’t fully understand where Charlie would end up taking me.

After completing The Evil That Was Done, I decided it was time to give Secrets of Redemption a break and turn to a new series. Yes, I still had the prequel idea rolling around in my head, but I thought it would be smarter to get something different started.

About ten months later, I barely had half of the first book written. Nothing was coming together. The whole story was a slog.

But I was determined to finish that book (and write two more!) before going back to Redemption.

However, God had other plans.

It started in the spring of 2020 (yes, when the pandemic first hit). Like everyone else, 2020 disrupted everything for me, including the book I was struggling with. (Although in retrospect, that book SHOULD have been disrupted, and long before 2020. But I digress.)

Basically, an eye injury caused me to slow down long enough for Charlie’s story to download into me, and I knew THAT was the book I needed to write. (Although, like everything that Charlie touches, I realized once I started writing The Summoning that it wasn’t just one book, but two. You can read more about the birth of The Summoning and The Reckoning here and here.)

I wrote both those books in record time—basically, in the same amount of time it had taken me to write half of the first book in the new series (10 months), I had completed, edited, and published both The Summoning and The Reckoning.

I took a break from Charlie to write The Third Nanny, and I nearly finished The Taking (which will be out in the summer of 2022) when I realized Charlie had more stories to share.

Starting with a Christmas murder mystery.

Which meant I had a choice: should I try and finish The Taking (which is nearly done), or pause on it to make sure I finished the Christmas murder mystery in time for Christmas?

As you probably guessed, I chose the Christmas murder mystery (AND a slight detour to write A Grave Error, a Halloween short story also starring Charlie).

And my current work in progress? Ice Cold Murder, Book 2 in the Charlie Kingsley Mysteries.

How many Charlie Kingsley books will there be? I have no idea. I can tell you that at the moment, I have at least a dozen ideas for more books, but at this point, I’m not going to make any predictions. Charlie is clearly the one in control, and everything is much easier if I just sit back and let her lead.

Every story has its own story. The behind-the-scenes story of how it got written. This is the story of The Murder Before Christmas. Click To Tweet

Check out The Murder Before Christmas right here.