If you’ve ever wondered what it would be like writing a series, I can tell you that for me, one word sums it up: surprising.

First, I guess I had unconsciously assumed writing the third book would be much like writing  This Happened to Jessica, the second book in this series. That one was super easy—it just flowed.

This one … wasn’t. And I can’t quite put my finger on why.

Especially because it IS “easier” and faster to write subsequent books in a series because you’re dealing with the same characters. (I still love the characters in this series, by the way.)

But not this time.

First of all, the story I thought I was writing wasn’t precisely the one I ended up with. While that in and of itself isn’t surprising (my books often surprise me me in how they end up coming together – trust the muse! She is smarter than you!), what was surprising was how painful of a birth it was.

So when I first started, I thought it was going to end one way (silly me). But when I got to the climax, I realized my original thoughts weren’t going to work at all. I also wasn’t sure exactly what needed to shift.

So I had to slow down and sit with it for a few days before I realized precisely what was missing. And, once that became clear, I also saw how Becca’s character arc completed itself.

There were many moments when the book felt off, so I’d have to take a step back. In doing that, something else would be revealed that made everything click.

This Happened to Jessica was completely different. That book just unraveled itself effortlessly onto the pages. While it surprised me at times, it was all very natural and easy.

So, why was that? Well, it could just be that books have their own personalities and birthing stories (similar to children). It also could be that, when I first conceived of It Began With a Lie (the first book in the series), I had This Happened to Jessica’s plotline woven into that book.

However, after a few months, I realized I couldn’t pull it off. I was essentially writing two complex stories, and it was too much for one book. Plus, I was still getting back into writing fiction (after almost a decade hiatus), and I needed to simplify to get myself back into the writing groove.

(Not that ANY of my books are “simple.” I seem to always end up writing these multi-layered plots with multiple characters, but regardless, it was a lot simpler to break it into two books than to try to blend two 100,000-word novels together.)

Because of that, I “lived” with the plot of This Happened to Jessica longer than The Evil That Was Done, so that likely made it easier to write.

For The Evil That Was Done, while I knew I needed a third book to complete the story arc, and I had a rough idea where it needed to go, many of the details weren’t revealed to me until I was in the thick of things. Which happens. But in this case, it was a little more painful than normal.

It’s also possible I may have been trying to “force” the book to go in a certain direction. It was only when I finally relaxed and let it reveal where it wanted to go that it came together.

To illustrate, let’s go back to my title dilemma.

So, back when I first outlined the three-book series, I knew the title was The Evil That Was Done.

Almost immediately, I started resisting it.

Why? Because I didn’t want a title with the word “evil” in it.

I felt like that would be off-putting. Or something.

Nevertheless, that began my quest to force the title to be something different. For a while, I thought I could replace it with “What Was Done.”

Eventually, however, I realized I was being ridiculous.

The title was The Evil That Was Done. Period. I needed to stop trying to force it to be something it didn’t want to be.

(There’s probably a good life lesson in that.)

Anyway, the more I let the book BE the book it wanted to be, the better it came together.

Every story has a story. The behind-the-scenes story of how it was birthed. This is the story behind The Evil That Was Done. Click To Tweet

Here’s where you can check out The Evil That Was Done, but if you haven’t started the series, I highly recommend beginning with It Began With a Lie (or you can grab all 3 books in the Secrets of Redemption Box Set). 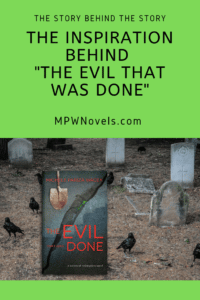