I squared my shoulders and flung open the closet door.

The closet looked like a normal hotel closet, with a few empty hangers on the rack, a folded blanket on the shelf, a stand for suitcases and ….

I blinked. Yes, there was a real-life mouse sitting in the middle of the closet. 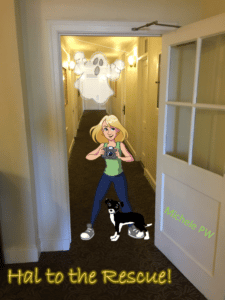 The mouse let out a shriek of its own and darted away, causing me to dance backward and trip over a chair, which clattered to the floor with me.

“Riley! What’s going on?” Craig’s voice demanded from the phone. At the same time, there was a loud pounding on the door, causing me to scream again.

“What’s going on?” a muffled male voice yelled from the other side of the door. “Do you need help?”

Was that Hal? Maybe he could get the mouse out. I untangled myself from the chair and hurried to the door.

“Hold on,” I said to Craig as I started unlocking the door.

“Hold on?” Craig squawked. “Are you kidding me? Hold on?”

I ignored him and opened the door. It was Hal, his arms filled with a variety of technical devices.

“I heard screams,” he said, his face barely containing his glee. “What is it? What did you see?” He started elbowing his way into my room.

“Who’s that?” Craig asked from the phone, at the same time as another voice called down the hallway. “Riley? Are you okay? I thought I heard screams.”

It was Gia, from the front desk. At least someone was asking me if I was okay. Unlike Hal, who was busy setting up his tech toys on my table. I noticed he had managed to knock over my ghost-hunting kit, strewing the contents (including my notebook and Reeses Peanut Butter Cups), across the floor. “What’s with the compass?” he asked.

“What did you see?” she asked, a little out of breath. Her face was bright with excitement.

“So, where was it?” Hal asked, leaning over his equipment and twisting and turning knobs.

“Riley, what on earth is going on there?” Craig asked.

I opened my mouth to explain about the mouse when I saw something move by my notebook—a little nose poked out between the pages.

I screamed again and jumped on the bed. “There! There,” I shrieked. “Do you see it?”

Hal swiveled around so quickly, he dropped one of his tech gadgets. “Where? What?”

“Is it Abby?” Gia asked breathlessly, madly searching the room.

“Riley, what is going on?” Craig asked.

The nose disappeared, and I saw the papers tremble. “There! By my notebook.”

“Your notebook? What?” Hal asked.

“Why would Abby be by your notebook?” Gia asked.

“Maybe it’s Noble, the cat,” Hal said, his movements jerky as he searched the room. He looked like a cop in a B action movie.

Gia looked confused. “A mouse? I don’t remember anyone ever talking about a ghost mouse before. Could Noble have killed it?”

“There’s a mouse in your hotel room?” Craig asked from the phone.

Hal finally found my notebook and slowly approached it, nudging it with his foot. Nothing happened. “Are you sure you saw a mouse?”

“I’ve never seen any mice in this hotel,” Gia said.

“Where did you see it?” Hal asked.

Hal’s eyes went wide. “The closet? Where Noble died? Are you sure you saw a mouse and not the cat?”

Hal went over to the closet to examine it.

“If there was a mouse,” Hal said, his head in the closet. “It seems to be gone now.”

Hal glanced at my notebook. “I already checked there. There was no mouse.” He turned to stare at me. “If there was a mouse, where did it go?”

Hal held his hands up. “I’m not accusing you of anything ….” 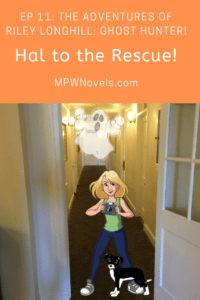 I opened my mouth to argue, but then closed it. I was starting to feel foolish, standing here on the bed yelling about a mouse that seemed to have disappeared.

“Look, there was something here,” I said, awkwardly getting off the bed. “I heard noises in the closet, and when I opened the door, there it was.”

“I’m not seeing any traces of anything,” Hal said, moving the equipment around. “I’m happy to stay here and investigate more.” He gave me a quick glance, his expression eager.

Oh sure. Steal my room away from me. He would like that. This was supposed to be my first official investigation, so I could launch my blog, and he was trying to weasel in and take all the credit.

Although … if he left, I would be alone in the room with a mouse. A mouse no one believed I saw. Is that what I wanted?

A cold draft brushed against me and I shivered. “What’s with the air conditioning?” I asked Gia, grateful for the distraction.

Gia looked puzzled. “What are you talking about?”

“I keep running into these drafts,” I said.

Hal’s expression sharpened. “Is there one happening right now?”

I nodded. “Can’t you feel it? It’s like the temperature dropped 10 degrees.”

Hal slowly approached, holding his tech gadgets out, his eyes glued to the readings. “Don’t move,” he said to me.

Don’t move? Wait a minute. Am I standing by a ghost? I shivered again as a cold draft gusted over me. I could feel the hairs on the back of my neck start to stand up.

Gia’s eyes widened. “Is it a ghost?” she asked.

“I’m not sure,” he said. “The readings are all over the place.” He shook his equipment.

He frowned and shook the equipment again. “I’m … uh … not sure.”

“What do you mean, you’re ‘not sure’?” I asked suspiciously. “What normally happens when a ghost is present?”

He ducked his head, refusing to meet my eyes. “I … ah … well, I’ve never actually seen a ghost before.”

“You what?” I practically yelled. “I thought you did! This whole time …”

“Well, I’ve been tracking ghosts for the past year,” he said. “I’ve just … well, I haven’t actually had a verified encounter yet.”

“A verified encounter?” I was starting to get a bad feeling. “You just told me not to move. What if this is dangerous?”

“Dangerous?” Craig asked from the phone, making me jump. I had forgotten he was still on the line. “Riley, what’s happening?”

“You might ruin everything if you move,” Hal said. “I need to lock down these readings.”

“’Ruin everything’? But what if something happens to me?”

“Abby is friendly,” Gia assured me. “She won’t hurt you.”

A movement caught my eye. There was that mouse again! Rustling around my Reeses Peanut Butter Cups. “There it is,” I shrieked.

Hal whipped his head around. “What? What?”

“I don’t see anything …” he began, but he was interrupted by a low growl.

“Did you hear that?” Gia asked, taking a step closer to me.

“What was that?” Hal breathed, stepping closer to the wall.

“Could it be …” Gia began, but the growl turned into a yowl.

Just like an angry cat pouncing on a poor, hapless mouse.

We all stood frozen, listening to the yowling of the cat and the squeaking of the mouse.

Gia, Hal,and I stared at each other.

“That sounded like a cat,” Hal said. I noticed he looked a little white himself. He started backing away toward the door.

“Maybe to people,” I said. “But certainly not to a mouse.”

Gia licked her lips. “I, uh, better get back downstairs.” She began edging toward the door.

“Wait a minute,” I said. “You’re both leaving me? Here? With a mouse?” I couldn’t bring myself to say the word ghost. The mouse was bad enough.

“I … don’t think you have to worry about the mouse anymore,” Hal said. “You’re good. Right?” He held the door open for Gia.

“I really have to get back to work,” Gia said apologetically as she disappeared out the door. Hal shot me a weak smile and quickly left as well.

My mouth fell open as I stood there, alone in my room, watching the door close.

How could they both leave me here alone?