On the surface, You seemed like a series I wouldn’t enjoy. 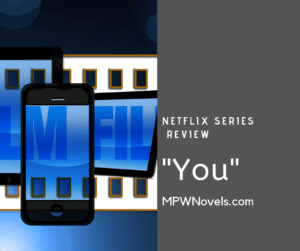 It’s about a stalker-turned-murderer who is obsessed with the woman he’s dating. It’s  (mostly) told from his point of view (there are a few instances when we flip to the victim’s point of view, but for the most part, it’s his story).

As I’ve mentioned before, I dislike stories told from the killer’s perspective. I especially hate being in a killer’s head when he is obsessed with women, intending to rape/torture them before he kills them.

Argh. It’s enough to want to take a shower.

(On a completely different note, this is one of the reasons I wrote Mirror Image. I don’t think I’ve ever once read a story about a crazy killer being obsessed with raping/torturing/killing men. Ever. So, I decided to write my own book about it, to balance the scales, so to speak. Anyway, even in that book, I don’t pull the reader into the killer’s head, because that is just not a fun place to be.)

So, why on earth would I start watching a show that tells a story from the point of view of the stalker?

Because it was actually really good. AND really believable.

You see, our stalker, Joe, really thinks he’s a good guy. He thinks he’s the hero of the story. He loves Beck, our heroine. He’s just trying to watch out for her—keep her from messing up her life—because she’s prone to making some really bad decisions.

(And, to Joe’s credit, Beck does have pretty poor judgement, and she does do a lot of really stupid things.)

This, I think, is likely how most stalkers (even killers) think. It’s not their fault! They “have” to stalk/kill, because they have no choice!

In other words, It’s not so much about enjoying the process, because they have been  “pushed” into it by extenuating circumstances.

And I admit, Joe has some good qualities. He’s not just completely crazy and evil. He does good things as well.

(Side note: I loved Stephen King’s The Shining for the same reason. Jack is an abusive, violent ex-drunk, but he doesn’t think he is. He thinks he’s a really good guy with a bad temper. It’s not his fault he loses his temper. It just happens! Other people do horrible things to him, so of course he’s going to fight back. It’s basically out of his control. Honestly, underneath all of the abuse, he’s a really good guy.)

But back to You.

Another thing I loved was the book theme that was woven throughout.

Joe loves books. In fact, he works in a bookstore, and Beck is a wanna-be writer (she’s a graduate student in the creative writing department of Columbia).

The series incorporates lots of great book references. (Her best friend is a direct descendent of J.D. Salinger who wrote Catcher in the Rye, and there’s a great bit about the original Oz series, which I adored as a child. What, you thought it was just The Wizard of Oz? Nonsense! There are over 13 books in the Oz series, and I’ve read them all.)

Check out my review of the Netflix series You. On the surface it seemed like a series I wouldn't enjoy. But appearances can be deceiving ... Click To Tweet

Anyway, if you’re looking for a new series on Netflix, I would definitely recommend giving You a try. It was a surprising fresh take on an old story angle. 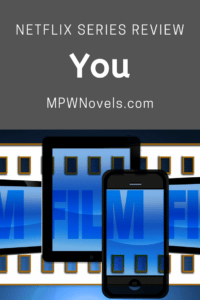