In late 2020 or early 2021 (I can’t remember the exact timing anymore), a fellow author friend of mine approached me about doing a list building mystery anthology featuring female detectives or sleuths. 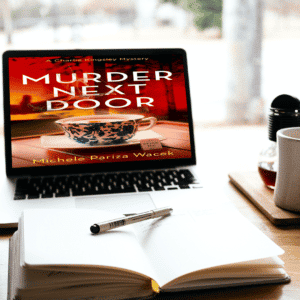 It would be available for the month of October 2021 for free in exchange for an email. After that, the anthology would be taken down and we would all get our stories back.

At first, I was hesitant. I was working on a standalone, The Third Nanny, and I thought my next book would also be a standalone. (That book, The Taking, is probably going to be a series, but more on that later.)

At the time, most of my book ideas were for standalones rather than for series. I’m not entirely sure why that is. While I did read a lot of standalones as a child, I also read a lot of series as well, so there’s really no rhyme or reason to it.

Anyway, why that’s important is because I wasn’t sure what I would write for this anthology. My current ideas were standalones, and even though they took place in the Redemption/Riverview universe, they weren’t built around a continuing cast of characters.

So, that summer I found myself writing A Grave Error (which has turned into a prequel to the Charlie Kingsley Mysteries) and The Murder Before Christmas.

Well, at that point, it appeared I had a series on my hands, so I got busy on Ice Cold Murder.

When I started working on Murder Next Door, it began to dawn on me that there was more to this series than Charlie solving murders and helping her tea customers. There were bigger stories that needed to be told.

What I needed was a more of a series arc.

But, I needed to it in such a way I could keep the books standalone as well.

It took a little doing but I think I’ve cracked the code.  Murder Next Door is the first book where I’ve started to put some bigger pieces on the board.

It’s going to be fun to see how all of this comes together.

Murder Next Door was also inspired by my strange and complicated relationship with vampires (more on that here) as well as doing a fun play on Rear Window. What if the James Stewart character thought his next door neighbor was a vampire?

Would it turn into a Fright Night type of story? Or something else?

Anyway, you can learn more and grab your copy of Murder Next Door here. If you want to start at the beginning of the Charlie Kingsley Mysteries, you’ll want to start with The Murder Before Christmas (or A Grave Error). AND if you want to check the series that started it all (since the Charlie Kingsley Mysteries is a spin off from Secrets of Redemption) start with It Began With a Lie.

Every story has its own story. The behind-the-scenes story of how it got written. This is the story of Murder Next Door. Click To Tweet