I’m Riley Longhill, and my dog Geist and I are ghost hunters.

Okay, okay, I confess. I’m new to this ghost-hunting business. You see, my mother died last year, and her death really brought home how truly short life is. 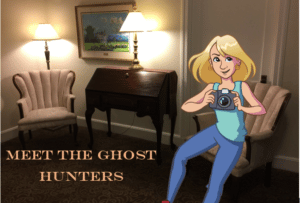 A few months after her death, I took a good, hard look at my life, and was appalled at what I saw. A job I hated. An on-again, off-again relationship (currently OFF and staying that way). A tiny apartment.

And a black-and-white mutt of a dog I named Geist, which means “ghost” in German (it’s pronounced GUYst).

Why did I name my dog Geist? Because I always had a secret passion for ghost hunting … traveling the country and visiting haunted places to investigate whether they truly ARE haunted.

But, I always told myself how silly that was. You can’t make any money being a ghost hunter, right? I needed to go do something practical, like work in an advertising agency. So that’s precisely what I did.

It paid the bills. (Sort of. If you didn’t count the growing balance on my credit cards.)

But, after my mother died, I realized I could no longer lie to myself.

For years, I had told myself that what I was doing was  was precisely what you’re supposed to do when you’re in your twenties and thirties. You get a job. You work. HARD. It doesn’t matter if you like it or not (in fact, you probably WON’T like it because it’s called “WORK” for a reason).

Besides, I had been brought up to value hard work. Want to be successful? Work hard.

If you do, eventually, you’ll be “rewarded,” and you can finally do what you always wanted to do.

But, what if you never get there?

That was the question that haunted me as I watched my all-too-young mother take her final breaths.

Did I really want to risk spending my life working so hard, only to never actually enjoy the fruits of my labor?

And, more importantly, did I really want to waste all those years working and not enjoying my life?

The next thing I knew, I was turning in my notice, packing up my belongings (putting most of them in storage), sub-letting my apartment, buying a secondhand camper, and hitting the road with Geist to become the next great ghost hunters!

I was ready. In fact, I had already begun fantasizing about what life would be like once Geist and I were famous ghost hunters. I imagined showing up at haunted hotels, only to have the receptionist start jumping up and down, yelling “Riley! Oh my God, I can’t believe you’re here! I love your stuff! Can we get a selfie? Geist, too. Look everyone! The ghost hunters are here!”

And, of course, I would graciously accept, kneeling down to make sure Geist was in the shot …

My phone rang. “Riley, where in God’s name are you?”

It was my best friend Coco. We had gone to high school together, been roommates in college, and were still friends to this day.

She was also convinced I had lost my mind.

“On the interstate,” I said, carefully navigating. I hadn’t quite gotten the hang of driving with a camper and it had been slow going so far. “Definitely getting a driver once Geist and I are famous ghost hunters,” I thought to myself.

“Aren’t you supposed to be focused on driving?”

Coco sighed. “Riley, it’s not too late to change your mind.”

“Why would I want to do that?”

“Oh, only because of 2,000 reasons I can think of off the top of my head. But, probably most importantly, how are you going to pay for any of this?”

I ignored the sarcasm dripping from her words as I gently pressed on the brakes. I didn’t want to get too close to the cars in front of me (never mind they were about a half mile ahead). “Why not a blog? Everyone loves a good blog. Especially a blog with a dog in it. Not to mention a blog about ghost hunters.”

“Uh huh. Can you even make money with a blog?”

“Lots of people make money with blogs,” I said defensively. I was pretty sure about it, even though I didn’t personally know anyone making money off a blog. “Huffington Post …”

“That’s a news organization. Plus they have like a gazillion writers.”

“Okay, so what about that one cooking blog, the pioneer woman …”

“She has a cooking show on The Food Network.”

“Perez Hilton,” I said triumphantly. “He has one of the most famous blogs in the world and he’s not on TV.” That wasn’t entirely true, as he was recently on Worst Cooks of America (yet another cooking show), but hopefully Coco wouldn’t remember that. 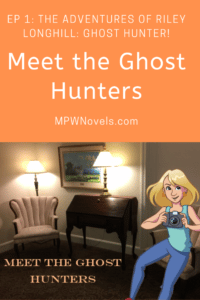 “Some ghosts are quite famous.”

Needless to say, Coco didn’t think too much of the blog idea.

“I hope there’s a financial Plan B,” she continued.

“Says the woman who quit her job to start a famous blog, despite not knowing anything about blogs, about being a ghost hunter, which you also know nothing about.”

“Ha ha,” I said sourly. “You know that Mom left me some money. And I’ve already picked up a few freelance writing assignments to tide me over until the blog starts making money. See? I’ve got a plan.”

Coco grumbled something that I couldn’t hear because my phone beeped just then. (Probably for the best … I was sure I wouldn’t want to hear what she said.) “Coco, I got another call coming in. I’ll call you later.”

“Call me tonight. After you stop for the day. Someone has to make sure you don’t end up dead on the side of the road.”

“I promise,” I said, although I wasn’t entirely sure how calling Coco every night would protect me from certain death, but I was afraid that comment would lead us down another rabbit hole.

“Riley? What’s this I heard about you leaving town?”

I bit the side of my cheek. Hard. It was Craig, my EX-boyfriend. Emphasis on the EX. “Not your concern anymore, Craig,” I said.

“None of your business. We’re not dating, anymore. Remember? You wanted to take a break?”

He was right. I was stuck in the middle of an existential crisis, along with mourning my mother, and when I tried to talk to him about it, he just wanted to “solve” it all for me.

Hell would freeze over before I would admit that, though.

“But, what are you doing? Where are you going?”

“I’m starting my new life,” I said proudly. (That actually sounded really good. Maybe that would be the first sentence of my new blog.)

“What do you mean, ghost hunter thing?” I asked indignantly. “It’s a real thing.”

“Uh huh,” he said, sounding exactly like Coco. “You didn’t quit your job over this, did you?”

“I’ll talk to you later,” I yelled and disconnected.

When Geist and I are famous ghost hunters, I was definitely going to enjoy watching them both eat their words.